Many Iraqis from around Mosul are unable to return because the militants rigged homes with explosives as they withdrew. 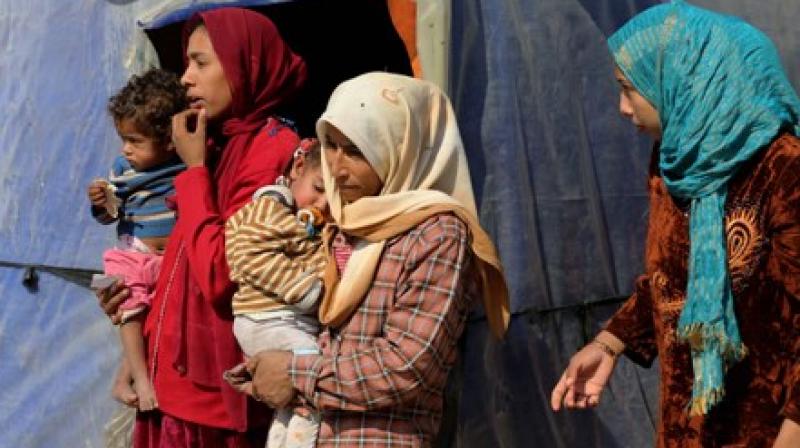 The destruction has caused the homeless to head for increasingly crowded camps, not homes. (Photo: AP)

Mosul: Outside a mosque on the edge of Mosul airport's ripped up runway, Iraqis made homeless by war sit on suitcases, taking a brief rest before beginning their onward journey, on foot or in buses.

Men push wheelchairs carrying elderly relatives or carts loaded with small children over the dusty and uneven ground, part of an exodus of people who have escaped from Islamic State's last major Iraqi stronghold.

Some are Mosul residents, displaced for the first time by the battle to drive the ultra-hardline group out of the largest city it has controlled in Iraq and Syria. Many others are from areas outside the city, brought to Mosul against their will, and now trying to get back to their towns and villages.

But the battle to recapture what remains of Islamic State's self-styled caliphate in Iraq has caused such destruction that for now the displaced head for increasingly crowded camps, and not home.

"We're on our way to Hammam al-Alil camp", at a town 20 km (13 miles) south of Mosul, 18-year-old Mohammed Mahmoud said, standing on the roadside near the mosque.

Mahmoud and about 30 other relatives, including small children and elderly men and women, had been taken by Islamic State from their village of Bakhira to Mosul, used as human shields as the militants withdrew last year, they said.

"Bakhira has been freed but we can't go back yet - the (army's) 9th Armoured Division are stationed there, and there's also the danger of booby traps" left by Islamic State, he said. "Until it's been emptied and cleared, we can't go there."

Many Iraqis from areas around Mosul, such as Bashiqa town to the east, are unable to return because the militants rigged homes with explosives as they withdrew, which have already killed a number of people.

Others simply have no homes to go back to, with countless houses and businesses used by Islamic State as military positions destroyed in air strikes and artillery shelling.

During their time in Mosul, Mahmoud and his family had crammed into a relative's house until the district was recaptured from the militants, allowing the family to start the long journey back to their village, he said.

He said he would shave his wispy beard at the first opportunity. Under Islamic State rule, men are forced to sport beards of a certain length, on pain of fine or punishment.

The family was relieved to be free, but anxious about spending the foreseeable future in tents.

The exodus has put a strain on existing camps, as new ones are opened or built to cope with the influx.

An Iraqi aid worker who had helped set up the government-built Hammam al-Alil camp on February 27, said that within 10 days, 26,000 people had flocked there.

"Supplies are short, and it's been constant work trying to register those coming in," Sajida al-Jabbouri said. "There are toilets, but there's no water".

The United Nations is building another camp outside the town. Labourers work every day setting out breeze blocks that will form the base of tents to house thousands of people.

International aid agencies say more than 200,000 Iraqis have been displaced by the fighting in Mosul, including more than 65,000 since Iraqi forces launched operations in the western half of the city last month.

The US-backed campaign to drive Islamic State out of Mosul has recaptured the eastern half of the city, and around a third of the west. Displacement has quickened recently because the west is densely populated and contains the crowded old city.

Those fleeing the west often transit through the wrecked Mosul airport, whose runway is littered with the rubble of blast walls erected by Islamic State.

The small green mosque at the corner of the runway closest to the city is damaged from exploding shells, and Islamic State supporters have graffitied an Arabic slogan of the group: "The Islamic State remains and is expanding".

But as the caliphate shrinks, it is the number killed or displaced that grows.