Panic spread in the city, which has been under a state of emergency and curfew. 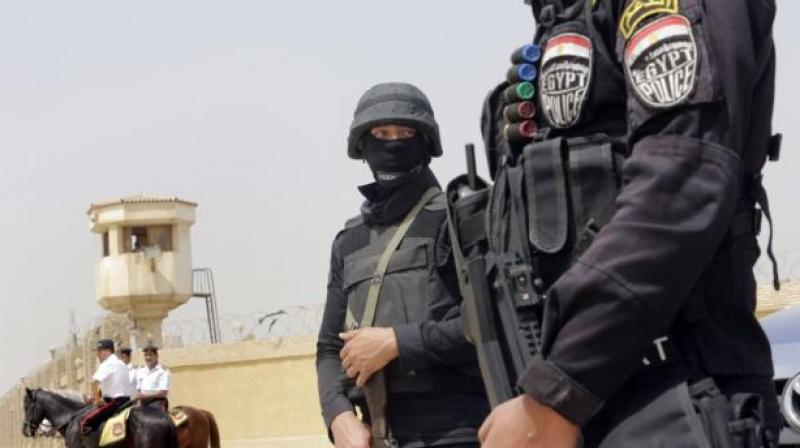 The attackers fired rocket-propelled grenades and traded gunfire with the guards outside the Church of Saint George in the center of el-Arish, security and military officials said.

Services at the church were suspended months ago, following a wave of attacks on Christians in Sinai.

The militants then robbed a bank before fleeing in a pick up and a motorcycle to the southern outskirts of the city.

"They looted the entire bank and left explosive devices inside," a senior security official said.

The clashes killed three civilians, including a child, three guards and one soldier and wounded another 15 people, including women and children, the officials said.

All officials spoke on condition of anonymity because they were not authorized to talk to reporters.

Panic spread in the city, which has been under a state of emergency and curfew since a series of deadly IS attacks in 2014. A bank employee appeared to have been kidnapped in today's attack, the officials said.

Security forces cordoned off the city center and evacuated residents living in the bank building. Pictures posted on social media by locals from el-Arish showed school girls fleeing a school located in the vicinity of the bank and the church.

The fighting came less than 24 hours after the Islamic State affiliate in Sinai killed nine soldiers in series of attacks targeting checkpoints across the nearby town of Sheikh Zweid.

IS claimed responsibility in a statement carried by the extremists' Aamaq media outlet. The army said 24 attackers were killed. On Thursday, six other policemen were also killed in an attack by the militants in el-Arish.

Egypt has been struggling to combat an Islamic insurgency in the northern Sinai that gathered strength after the military overthrew of an elected Islamist president in 2013.

St. George's in el-Arish was attacked twice previously, during the uprising against longtime autocrat Hosni Mubarak in 2011, and again after the 2013 ouster of Islamist President Mohammed Morsi.

Sunday's attacks on military checkpoints prompted Egyptian authorities to postpone the opening of the Rafah crossing with Gaza, which had been due to open for four days.

No new date has been set.

The uptick in violence comes at a time when Egypt and the Gaza Strip's ruling Palestinian militant Hamas group, have been making reconciliatory efforts, including the shutting down of underground tunnels used over the years to smuggle weapons, goods and militants to and from Gaza.

Egypt has also mediated a reconciliation agreement between Hamas and it Palestinian rival, Fatah, which rules the West Bank.

The opening of the Rafah crossing was part of efforts to ease a decade-old Israeli-Egyptian blockade of the coastal territory.