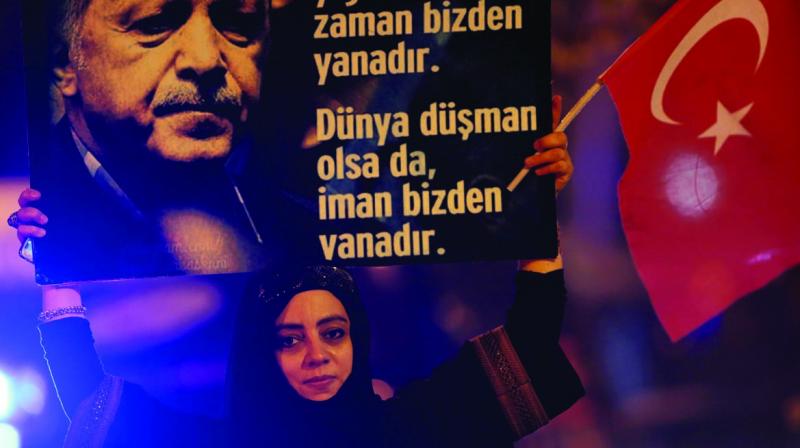 A supporter of President Recep Tayyip Erdogan holds a placard that reads ‘Don’t worry, the world can be our enemy’ in Ankara, Turkey. (Photo: AFP)

With political tensions once again escalating in Turkey after a result that opponents fear will hand Erdogan one-man rule, German Chancellor Angela Merkel called for dialogue to seek calm.

The ‘Yes’ camp won 51.41 per cent in Sunday’s referendum and ‘No’ 48.59, according to near-complete results released by the election authorities.

But the opposition immediately cried foul over alleged violations, claiming that a clean vote would have made a difference of several percentage points and handed them victory.

The main opposition Republican People’s Party (CHP) and the pro-Kurdish Peoples’ Democratic Party (HDP) said they would challenge the results from most of the ballot boxes.

“There is only one decision to ease the situation in the context of the law -- the Supreme Election Board (YSK) should annul the election,” CHP deputy leader Bulent Tezcan said.

The opposition was particularly incensed by a decision by the YSK to allow voting papers without official stamps to be counted, which they said opened the way for fraud.

The referendum campaign was conducted on an “unlevel playing field” and the vote count was marred by the late procedural changes that removed key safeguards, international observers said.

Turkey’s three largest cities — Istanbul, Ankara and Izmir — all voted ‘No’ although ‘Yes’ prevailed in Erdogan’s Anatolian heartland. “On April 17, we have woken up to a new Turkey,” wrote pro-government Hurriyet columnist Abdulkadir Selvi. The new system is due to come into effect after elections in November 2019.

The new system would dispense with the office of prime minister and centralise the entire executive bureaucracy under the president, giving Erdogan the direct power to appoint ministers. It would also mean that Erdogan, who became President in 2014, could seek two more five-year terms, leaving him in power potentially until 2029.

Throughout the campaign, Erdogan launched bitter attacks on the European Union, accusing member states of behaving like the Third Reich in failing to allow his ministers to campaign among expats.

In an indication more strife with Brussels could be in the offing, Erdogan said he would now hold talks on reinstating capital punishment, a move that would automatically end Turkey’s EU bid.

If Turkey were to hold a referendum on bringing back capital punishment it would be a break with European values, the French president’s office warned.