Thousands of civilians trapped in Aleppo

In return the rebels want the evacuation of the towns of Madaya and Zabadani in Damascus province which are besieged by the regime. 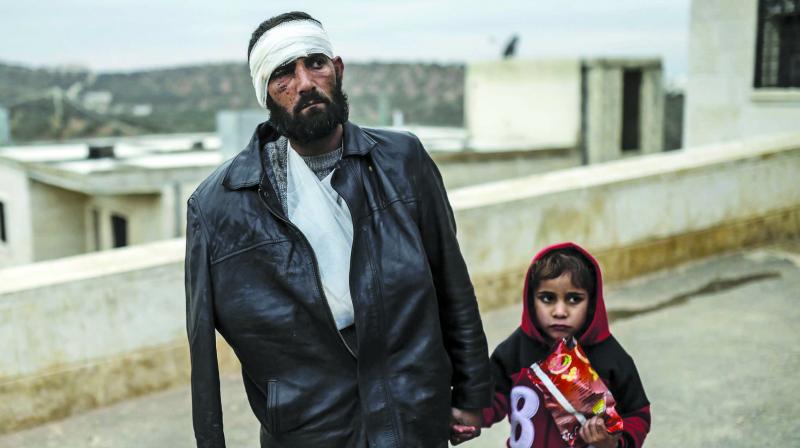 An injured Syrian man stands with his child outside a hospital on the Syria-Turkey border on Friday. (Photo: AFP)

Aleppo: Thousands of trapped civilians and rebels waited desperately Saturday for evacuations to resume from the last opposition-held areas of Aleppo after the operation was suspended by the Syrian regime.

A rebel representative told AFP that an agreement had been reached to allow more evacuations from the city, which has been ravaged by some of the worst violence of the nearly six-year war that has killed more than 310,000 people.

But there was no confirmation from President Bashar al-Assad’s regime or its staunch allies Russia and Iran, which are under mounting international pressure to end what US President Barack Obama denounced as the “horror” in Aleppo.

Mr Obama called Friday for impartial observers to monitor efforts to evacuate civilians from the devastated city and warned Assad that he would not be able to “slaughter his way to legitimacy”.

Families spent the night in freezing temperatures in bombed out apartment blocks in Al-Amiriyah district, which was the departure point for evacuations before they were halted on Friday, an AFP correspondent reported. Many had not had a proper meal in days and were surviving on just a few dates.

A lot of people had burned all possessions they could not carry with them, determined not to allow them to be looted by government troops and militia who have recaptured almost the entire city.

The government blamed rebels for the suspension of the evacuation operation which had begun on Thursday, saying they had tried to smuggle out heavy weapons and hostages.

The opposition accused the government of halting the operation in a bid to secure the evacuation of residents from Fuaa and Kafraya, two villages under rebel siege in northwestern Syria.

In return the rebels want the evacuation of the towns of Madaya and Zabadani in Damascus province which are besieged by the regime.

“We are working on a resumption of the operations today (Saturday),” said Al-Farook Abu Bakr, a representative of the hardline Islamist rebel group Ahrar al-Sham.