A Qatari sociologist recently made news when he posted a video on YouTube teching boys and men how to beat their wives. 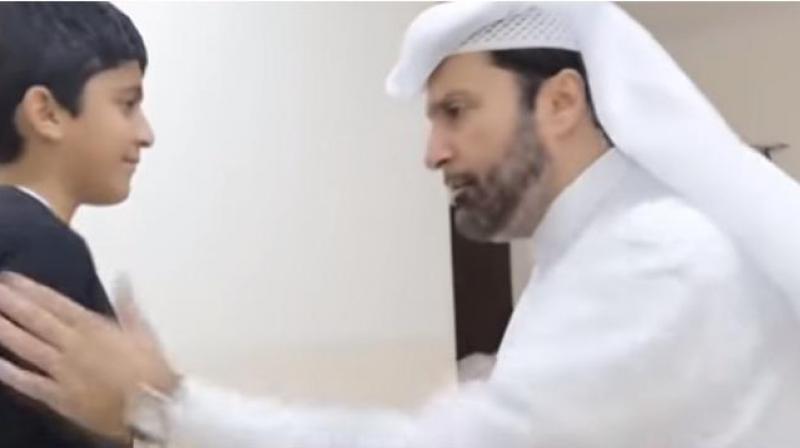 The video starts with him greeting his viewers and guiding them how they should beat their wives. (ScreenGrab:Youtube)

Doha: A Qatari sociologist recently made news when he posted a video on YouTube teching boys and men how to beat their wives.

The man, goes by the name Abd Al Aziz Al-Khazrai, posted the video on his personal YouTube channel. The purpose of the video is supposed to teach Muslim men ‘how to be the leader of the house’ and ‘how to discipline ones wife’.

The video starts with him greeting his viewers and guiding them how they should beat their wives. He said, “Is beating your wife necessary? Must a man beat his wife everyday? No.”

Abd Al Aziz Al-Khazrai then went on and spoke about about how a man beats his wife ‘out of sheer love’. He says, “The beating needs to be light. The husband must make his wife feel her feminine side and her husband’s masculinity.”

In the video, a young boy is also present, who volunteers to show ‘how Islam teaches you to beat your wife’. Abd Al Aziz slaps the boy lightly on his shoulders to demonstrate what he is saying.

‘The husband must make his wife feel his strength and aura’. That’s exactly how the beating should be, he says in the video.

“The Prophet Muhammed…you see him, he is so merciful. The Prophet forbade striking the face. He forbade men beating their wives on the face.” He further stressed that slapping the face, hitting the head, punching the nose – all of this is not allowed. The beating is merely to ‘discipline’ your wife.

He further went on highlighting that everyone needs to understand how the man is the leader of the house. He says, a leader has authority, just like a company manager. How does a husband beat his wife? He gives her a disciplinary beating out of love. He loves her. Let us look how Islam teaches you to beat your wife. He then goes on to use the boy as a wife to show his viewers about his opinions.

"First, he must admonish her - in other words, he should advise her. Then, he should refrain from sharing a bed with her. If all of this doesn't help, we start the beating as a last resort. This is a painless beating that does not leave bruises or cause bleeding. The beating I just gave Nayef is the true gentle beating in Islam," says the sociologist.

The video has received more than 5 lakh views on YouTube and has caused outrage online. The comments on the video were disabled after people slammed the sociologist.