Iwai has been in post in Baghdad for less than 3 yrs, but his fan base reaches far beyond heavily fortified walls of diplomatic Green Zone. 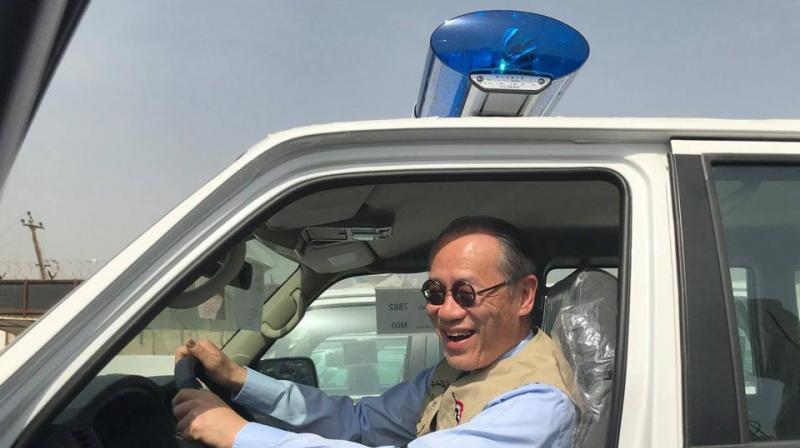 Iwai’s journey in the Arab world began 30 years ago, on his bosses’ orders. (Photo: AFP)

Fumio Iwai has been in post in Baghdad for less than three years, but his fan base reaches far beyond the heavily fortified walls of the diplomatic Green Zone.

Hundreds of thousands have been reeled in by his humble charm.

And never more so than when the bespectacled and wiry ambassador recorded a missive wearing an Iraq football jersey ahead of a potentially divisive World Cup qualifier.

Iraqi civil servant Haydar al-Banna remembers this dispatch by Iwai – in June last year since watched by over 730,000 people – fondly.

The ambassador said, “I will be happy if our team (Japan) win, and I will be sad if the Iraqi team loses”, recalls 35-year-old Banna.

Moments like this have seen Iraqis claim the diplomat as their own, impressed by his deft navigation of a country still engulfed by chaos 15 years after the US-led invasion that toppled dictator Saddam Hussein.

“We say he is an Iraqi – he is like someone who has lived here for 50 years,” Banna says.

Iwai’s journey in the Arab world began 30 years ago, on his bosses’ orders. “The Japanese foreign ministry ordered me to learn Arabic,” the 57-year-old tells AFP. The young diplomat spent two years in Egypt, living with a family and immersing himself in the language.

Iwai says Arabic is “one of the most difficult (tongues) in the world, because of the vast number of words and expressions”.

Three decades on, he claims he is still at “the start of the road” in his efforts to master the language. But Iraqis beg to differ.

Mention Iwai’s name in Baghdad, and the response is invariably the same: “Have you seen his latest video?”

In a country obsessed with smartphones and social media, the ambassador knows how to play to a modern gallery, while respecting traditions.

The videos are short – typically between one and two minutes – allowing him to grab and maintain the attention of social media users. But he still manages to cram in a thundering “Salam Aleikum” and other Muslim formalities, before zeroing in on a chosen theme.

On Japan Day, Iwai recorded a video at Baghdad’s international fair, in traditional Iraqi dress, with a black and white Iraqi keffiyeh scarf slung across his shoulder.

“Look how beautiful I am! Today, I am a full-blooded Baghdadi!” he beamed in that dispatch.

The ambassador is surprised other diplomats haven’t taken to social media to try to connect directly with host citizens.

“Several ambassadors speak Arabic, but it is rare that they use it to speak to the people”, Iwai tells AFP.

The diplomat says he will miss certain things about Iraq, like “dolmas” – stuffed vegetables some dub Iraqi sushi.

But there is one thing Iwai will not miss. The weather.

“The main difficulty is the weather”, he says, lamenting summertime temperatures that often surpass 50 degrees Celsius. “Each time I come back here I feel it’s getting hotter and hotter”, he adds. “That might be related to concrete walls, less green land and air pollution.”

While Iwai is due to depart this month, his fans want him to become an Iraqi citizen. And some netizens even eye him as a future Minister of Reconstruction.

But ever the diplomat, Iwai has politely avoided causing red faces, by pointing out that Japan does not permit dual citizenship.