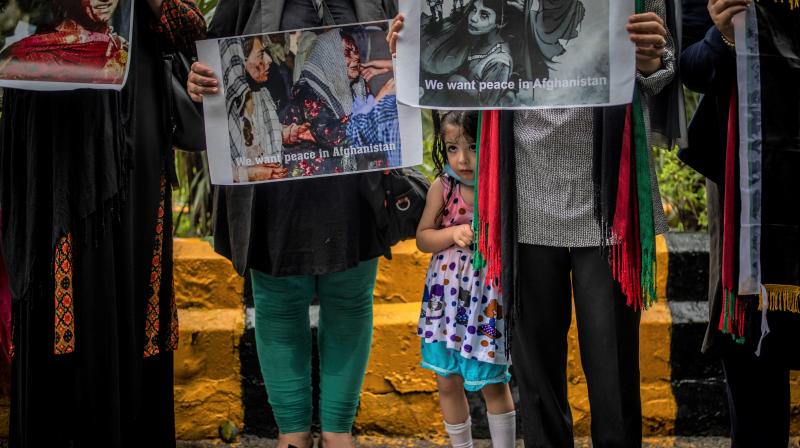 A young Afghan girls stands next to her mother participating with other Afghan women against Pakistan and the Taliban takeover of Afghanistan. (Photo: AP)

Islamabad: Pakistan has said that it has suffered most from the Afghanistan war stressing that it faced nearly "80,000 casualties" and over "USD 150 billion" in financial losses, local media reported.

Asim Iftikhar Ahmad, spokesperson for Pakistan's Foreign Office, on Saturday said that after Afghanistan, Pakistan has suffered most has been the biggest victim of decades of the Afghan conflict.

"Of all the countries of the world, Pakistan has suffered the most -- with over 80,000 casualties and more than 150 billion US dollars in economic losses," he said.

Earlier, the European Parliament in a resolution over Afghanistan's situation, alleged that Pakistan is "assisting the Taliban" in fighting the National Resistance Front of Afghanistan (NRF) in the Panjshir Valley "by supplying its special forces and providing air support", according to The News International.

Ahmad expressed dissatisfaction over the remarks saying that Islamabad played a crucial role in the Doha peace process and subsequent intra-Afghan negotiations.

However, Afghans and the previous Kabul government had blamed Pakistan for its proxy war in Afghanistan.

In August, Afghans all across the world had staged protests against Pakistan and called for a UN sanction against Islamabad.