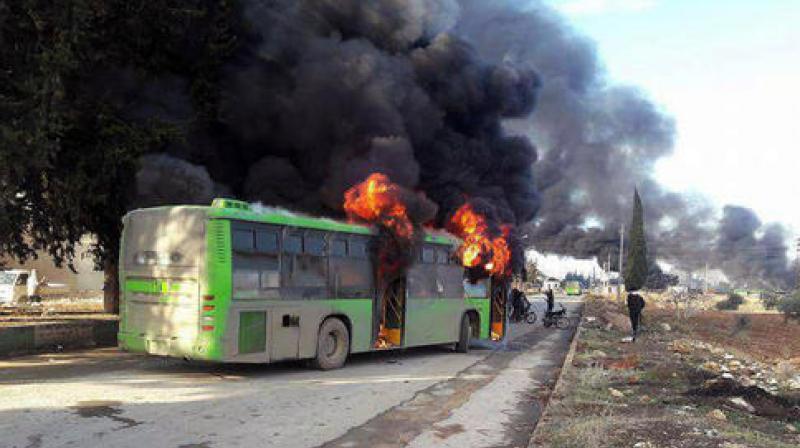 Aleppo, Syria: Some 350 people were able to leave a rebel-held pocket of east Aleppo on Sunday, a medical official said, despite the official postponement of evacuations of civilians and fighters from the devastated Syrian city.

Dozens of buses had entered Aleppo earlier in the day to resume evacuations, but plans were called off at the last minute after gunmen attacked vehicles for a similar operation from two rebel-besieged villages.

The development came as the UN Security Council prepared to vote on a resolution to deploy observers to the city, with Syria-allied Russia giving cautious backing to the measure.

"Five buses carrying the evacuees arrived from besieged parts of east Aleppo," said Ahmad al-Dbis, who heads a team of doctors and volunteers coordinating evacuations to rebel-held Khan al-Assal, from where they can travel on to other parts of Aleppo and Idlib provinces.

"They were in a terrible state," Dbis said.

"They hadn't eaten, they had nothing to drink, the children had caught colds, they were not even able to go to the toilet," he added.

The Syrian Observatory for Human Rights said the 350 were able to be evacuated after Russia and Turkey urged the Syrian regime to allow the convoy of buses to pass its final control point.

Evacuations were suspended on Friday, a day after convoys of people had begun leaving the rebel sector under a deal allowing the regime to take full control of the battleground city.

The main obstacle to a resumption had been a dispute over how many people would be evacuated in parallel from two Shiite villages, Fuaa and Kafraya, under rebel siege in northwestern Syria.

But just as a deal to go ahead with the evacuations was found and announced by both sides, gunmen attacked and torched buses sent to take people out of Fuaa and Kafraya, a monitor said.

The Syrian Observatory for Human Rights said one bus driver was killed in the attack and that security guarantees would be needed before evacuations could resume.

Yasser al-Youssef of the Nureddin al-Zinki rebel group confirmed that "the evacuations have been momentarily suspended".

Buses would not leave the rebel areas of Aleppo until residents of Fuaa and Kafraya were also able to leave, the Observatory said.

A rebel representative had said that hundreds of people would also be evacuated from Zabadani and Madaya, two regime-besieged rebel towns in Damascus province, as part of the deal.

By early evening, more than 30 buses were packed with people awaiting evacuation, while thousands more stood in the cold for their turn to board other buses, an AFP reporter said.

Meanwhile the UN Security Council said it would vote Monday on sending observers to ensure "the well-being of civilians", along with the Syrian Red Crescent and International Committee of the Red Cross who are already supervising evacuations.

Russia had threatened to veto a draft resolution presented by France, but after nearly four hours of closed-door consultations a new proposal was agreed.

US Ambassador Samantha Power anticipated member states would vote "unanimously" at 9:00 am (1400 GMT) on Monday.

Iran's official news agency IRNA said the foreign ministers of Russia, Turkey and Iran would meet Tuesday in Moscow to discuss the situation.

Families have been sheltering at night in freezing temperatures in bombed out apartment blocks in Aleppo's Al-Amiriyah district, the departure point for evacuations.

An AFP reporter visited a hospital in the rebel sector where patients lay on floors without food or water and almost no heating.

Aleppo has seen some of the worst violence of the nearly six-year war that has killed more than 310,000 people.

A physiotherapist, Mahmud Zaazaa, said only "three doctors, a pharmacist and three nurses" remained in the area.

An official said more than half of Aleppo's buildings and infrastructure have been badly damaged or destroyed since violence erupted there in 2012.

UN envoy Staffan de Mistura estimated that as of Thursday around 40,000 civilians and perhaps as many as 5,000 opposition fighters remained in Aleppo's rebel enclave.

Before evacuations were suspended around 8,500 people, including some 3,000 fighters, left for rebel-held territory elsewhere in the north, said the Observatory.