ISIS bomber detonates vest after blending in among soldiers waiting for wages. 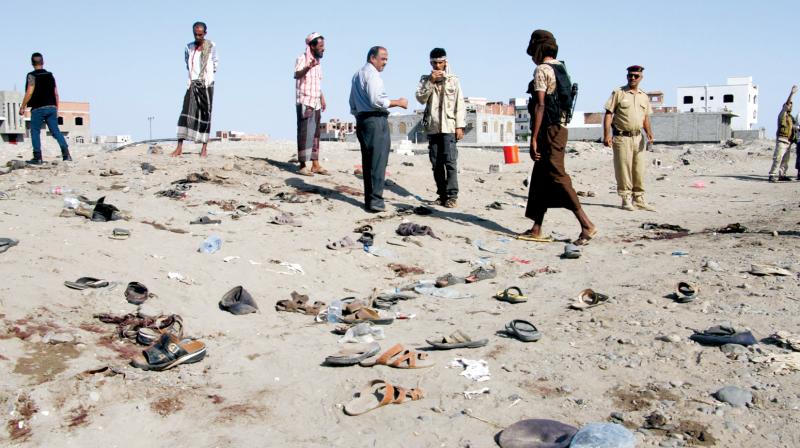 Slippers are strewn across the site of a bombing at a military compound in Aden, Yemen. (Photo: AFP)

Aden: A suicide bomber from the Islamic State group killed at least 48 Yemeni soldiers in Aden Sunday, the latest in a string of deadly attacks against recruits in the country’s second city.

Military officials and medics said dozens more were wounded in the attack that targeted a crowd of servicemen who had gathered to collect their salaries on their payday near a base in northeastern Aden.

“The number of those killed has risen to 48, while 84 others were wounded,” Aden health chief Abdel Nasser al-Wali told AFP.

Mr Wali had initially given a toll of 40 dead, warning that the number was likely to increase due to “critical cases.”

The attack was carried out by a suicide bomber who blended in among soldiers crowding outside the house of the head of special security forces in Aden, Colonel Nasser Sarea, in Al-Arish district, near Al-Sawlaban base.

Mr Sarea said the bomber “took advantage of the gathering and detonated his explosives among them”.

Images from the blast scene showed blood stains and scattered shoes across the sandy ground.

ISIS claimed responsibility for the attack, saying in a statement that a “martyrdom seeker” had gotten through security checkpoints before blowing himself up.

The attack comes eight days after a similar bombing at Al-Sawlaban claimed by ISIS killed 48 soldiers and wounded 29 others.

Yemeni authorities have fought a months-long campaign against jihadists who remain active in the south and east of the impoverished Arabian peninsula country.

ISIS and its jihadist rival Al-Qaeda have taken advantage of a conflict between the government and Yemen’s Huthi rebels, who control the capital Sanaa, to bolster their presence across much of the south.

The two extremist groups have carried out a spate of attacks in Aden, Yemen’s second city and headquarters of the internationally recognised government whose forces retook the port city from the Huthis last year.

But Al-Qaeda has distanced itself from the December 10 attack, claiming that it tends to avoid “the shedding of any Muslim blood” while focusing on fighting the “Americans and their allies.”

Al-Qaeda has long been the dominant jihadist force in Yemen, located next to oil-flush Saudi Arabia and key shipping lanes, but experts say IS is seeking to supplant its extremist rival.

Washington regards Al-Qaeda’s Yemen-based branch as its most dangerous. In August an ISIS militant rammed his car into an army recruiting centre in Aden, killing 71 people in the deadliest jihadist attack on the city in over a year.