Thousands of followers are expected to attend the foundation stone laying ceremony of the first Hindu temple in Abu Dhabi on Saturday. 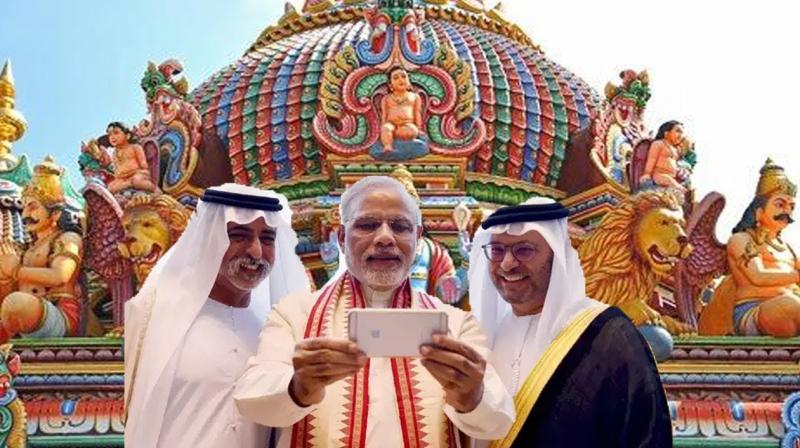 Indian Prime Minister poses for a selfie with Arabs on his last visit. (Photo:AP)

Dubai: Thousands of followers are expected to attend the foundation stone laying ceremony of the first Hindu temple in Abu Dhabi on Saturday, according to a media report.

The four-hour ceremony will begin in the presence of Mahant Swami Maharaj, the spiritual leader of BAPS Swaminarayan Sanstha, the religious and social organisation constructing the temple.

The preparations are in place for the 'Shilanyas Vidhi' (foundation stone laying ceremony) of the stone temple at Abu Mureikha, the Khaleej Times reported. The main ceremony will see the priests sanctify pink sandstones that will be used to set foundation of the temple.

]Sheikh Nahyan received Swami Maharaj and his delegation of Hindu priests at Al Maktoum International Airport on Thursday. Temple volunteers said there was a special orientation conducted where devotees were told details of the ceremony.

Passes were distributed for 'yajman seva' for those who have made a donation of USD 680 or USD 1,300 to participate in the ritual and support the BAPS temple, the report said. The temple will be a cultural complex with art gallery, halls, library and gym, it said, adding that it is not clear when the temple would be completed.

The temple with seven towers representing the seven emirates in the UAE will come up on a 14-acre piece of land at Abu Mureikhah, close to the Abu Dhabi-Dubai highway.

The stones for the temple will be carved by temple artisans in India and assembled in the UAE. The plan to build the temple in the UAE's capital was approved by the Abu Dhabi government during Prime Minister Narendra Modi's first visit to the country in 2015.