28 including 17 civilians killed in regime attacks in Syria

The latest violence comes after UN chief Antonio Guterres called Tuesday on Russia and Turkey to 'stabilise the situation' in Idlib region. 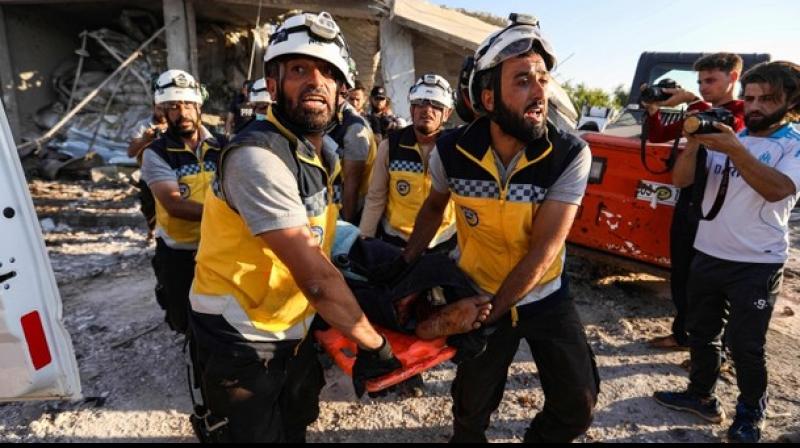 The bombardment destroyed shops and ripped apart bodies, according to an AFP photographer, who found human remains more than a hundred metres away from the site of the strike. (Photo: AFP)

Twelve civilians were killed in regime air strikes on a village in the Jabal al-Zawiya region of southeastern Idlib province, the Syrian Observatory for Human Rights said.

The bombardment destroyed shops and ripped apart bodies, according to an AFP photographer, who found human remains more than a hundred metres away from the site of the strike. Rescue workers were seen pulling bodies from under the rubble.

Four other civilians were killed in air raids on nearby towns and villages in southern Idlib, while one civilian died in air strikes on the edges of Idlib's eponymous provincial capital, the Britain-based Observatory said. In the north of nearby Hama province, regime rocket fire killed 11 jihadists, a day after fierce clashes in the area left at least 55 combatants dead, including 14 regime fighters, the war monitor reported.

The latest violence comes after UN chief Antonio Guterres called Tuesday on Russia and Turkey to "stabilise the situation" in the Idlib region. "I am deeply concerned about the escalation of the fighting in Idlib," he told reporters, adding that "civilians are paying a horrific price". His comments came ahead of a UN Security Council session on the situation.

The world is facing "a humanitarian disaster unfolding before our eyes," Mark Lowcock, the UN's humanitarian chief, told the council. Parts of Aleppo, Hama and Idlib are supposed to be protected from a massive regime offensive by a buffer zone deal that Russia and Turkey signed in September. But it was never fully implemented as jihadists refused to withdraw from a planned demilitarised zone.

In January, former Al-Qaeda affiliate Hayat Tahrir al-Sham extended its administrative control over the region, which includes most of Idlib province as well as adjacent slivers of Latakia, Hama and Aleppo provinces.

The Syrian government and Russia have upped their bombardment of the region since late April, killing more than 400 civilians, according to the Observatory.

Syria's war has killed more than 370,000 people and displaced millions since it started in 2011 with the repression of anti-government protests.