'Will crush Kurds if they don't withdraw before Tuesday,' Turkey warns Syria

Turkey began its operation on October 9, days after the pullout of US troops from northern Syria. 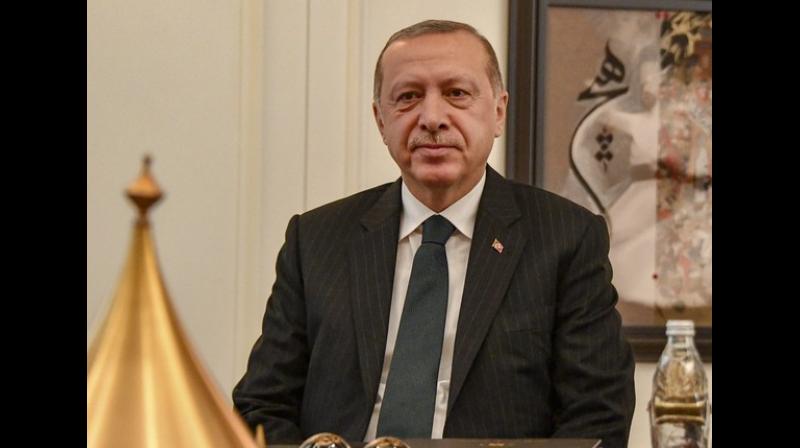 Turkish President"Today is the second day [of the ceasefire]. This process will end on Tuesday night. If the promises given to Turkey are not fulfilled, we will not wait, as before. We will continue the operation we started and will continue to destroy terrorists," Erdogan said. (Photo: ANI)

Ankara: Turkish President Recep Tayyip Erdogan has warned that his forces would "crush the heads" of Syrian Kurdish forces in northern Syria if they did not complete a pullout from the border area within the stipulated time.

"Today is the second day [of the ceasefire]. This process will end on Tuesday night. If the promises given to Turkey are not fulfilled, we will not wait, as before. We will continue the operation we started and will continue to destroy terrorists," Erdogan was quoted as saying by Sputnik on Saturday.

US Vice President Mike Pence and Secretary of State Mike Pompeo flew to Ankara on Thursday, to attend a meeting with the Turkish President and brokering a 120-hour long ceasefire deal aimed at allowing Syrian Kurdish forces to retreat to a distance of about 30 km from the Syrian-Turkish border.

The president added that Ankara would "implement its own plans" if Ankara could not reach a solution with Russia on the Syrian forces deployed in the country's north.

In addition, Erdogan once again reiterated that he has planned to discuss the deployment of Syrian forces in a 'safe zone' in Syria with Russian President Vladimir Putin next week.

"Yesterday I held talks with US President Donald Trump. On Tuesday, we will continue the dialogue with Mr Putin. In the area where the operation is taking place, the troops of the regime [of Syrian President Bashar Assad] are under the protection of Russia. We will discuss this with Mr Putin," he said.

Last Sunday, after Turkey began a military operation in northern Syria it said was aimed at the Syrian Kurdish 'terrorists', local Kurdish forces reached an agreement with Damascus allowing Syrian Army troops to take up positions along the entirety of the Syrian-Turkish border to try to prevent a Turkish assault.

Turkey began its operation on October 9, days after the pullout of US troops from northern Syria.

Unlike its US and NATO allies, which saw the Kurds as a key ally in the coalition's fight against the jihadists of Islamic State, Ankara classifies them as a terrorist group with links to the PKK, a Turkish Kurdish political and militia group which has waged a guerilla war against the Turkish state over the course of several decades.

Meanwhile, Syrian President Bashar al-Assad on Friday called for an immediate halt to Turkish aggression in northern Syria and demanded a full-fledged withdrawal of all foreign forces from Syria.