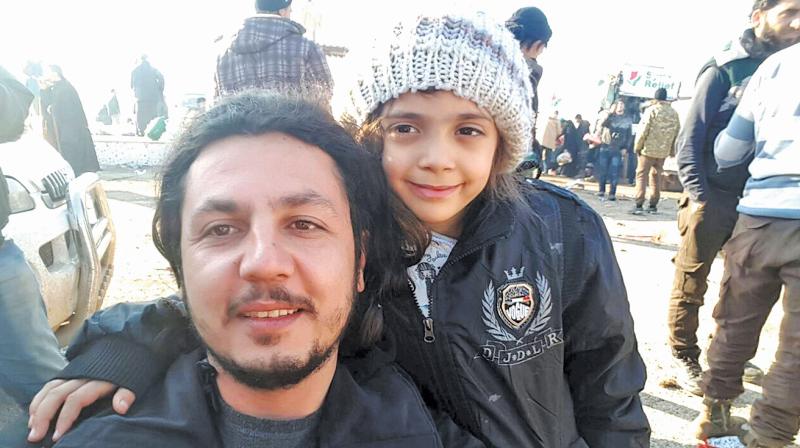 An aid worker takes a selfie with seven-year-old Bana al-Abed after she was evacuated from Aleppo. (Photo: AFP)

Cilvegozu (Turkey): Seven-year-old Bana al-Abed, whose Twitter account has offered a tragic account of the war in Syria, was evacuated from the divided Syrian city of Aleppo on Monday, a Turkish NGO announced on social media.

“This morning @AlabedBana was also rescued from #Aleppo with her family. We warmly welcomed them,” the Humanitarian Relief Foundation (IHH) wrote on its Twitter account, sharing an IHH aid worker’s selfie picture with the girl.

For her tens of thousands of followers, Ms Bana is a symbol of the tragedy unfolding in Syria, although Syrian President Bashar al-Assad’s regime has slammed her and her mother’s nearly daily tweets as propaganda.

Ms Bana’s account has posted pictures of the destruction in Aleppo including her rubble-littered street, while people have tweeted messages of support and concern, notably fearing for her life when tweets became less frequent.

“@AlabedBana and many children arrived to #Aleppo countryside. @sams_usa@UOSSM and partners arr coordinating the response plan there,” he tweeted, also announcing the evacuation.

Ms Bana’s last tweet with her mother Fatemah before the evacuation made an appeal to Turkish President Recep Tayyip Erdogan and foreign minister Mevlut Cavusoglu for putting a fragile ceasefire back on track after frequent delays.

“@MevlutCavusoglu & @RT_Erdogan please please please make this ceasefire work & get us out now. We are so tired. - Fatemah #Aleppo.”

Responding in a tweet Monday, Mr Cavusoglu wrote: “Difficulties on the ground won’t deter us sister. Rest assured that we are doing all to get you and thousands of others to safety.”

An IHH spokesman confirmed to AFP that the young girl was among the first batch of evacuees Friday morning, and was at Rashidin region at the moment.

“She is likely to be transferred to the camps in Idlib province,” he said.

The Islamic charity IHH is playing a large role in the transport of aid for Aleppo as well as the transfer of evacuated Syrians into camps in the Idlib province near the Turkish border.

There are still thought to be around 10,000 people stuck in eastern parts of Aleppo.