Unravelling the story of a mass grave in Iraq

Investigators are facing the enormous task of piecing together details of what happened to IS's many victims, and determining who they were. 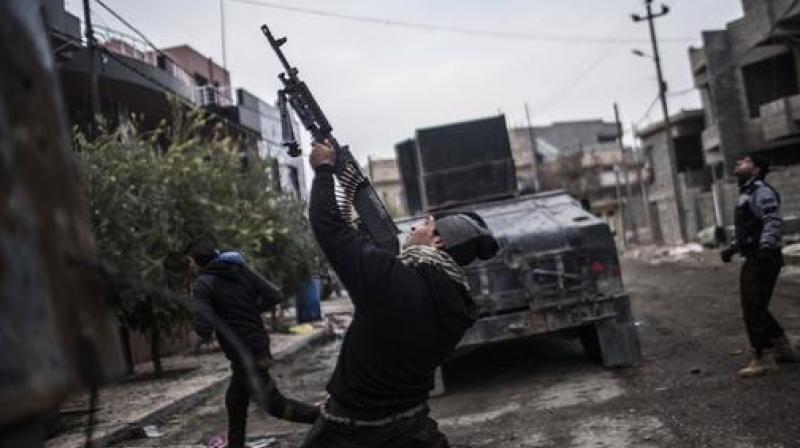 A member of the Iraqi Special Forces shoots his machine gun against an Islamic State militant drone, in Mosul. (Photo: AP)

Hamam Al-Alil: Three men set up a fence and a ribbon of yellow and black crime scene tape around a site south of Iraq's Mosul, marking a mass grave of jihadists' victims.

It is one of dozens of such sites discovered in areas around Iraq that have been recaptured from the Islamic State group, whose rule has been defined by extreme brutality.

Now investigators face the enormous task of piecing together details of what happened to IS's many victims, and determining who they were.

"It really is a crime scene," Fawaz Abdulabbas, deputy head of the International Committee on Missing Persons in Iraq, said of the site near Hamam al-Alil discovered after Iraqi forces recaptured the town in November.

"Between 80 and 100 bodies are here, including those of women and children," Abdulabbas said.

Among the bodies may be that of Imed Dhaer, a policeman who was kidnapped by IS, leaving 10 children without their father and two wives without their husband, his brother Fuad said.

When Iraqi forces launched an offensive in mid-October to recapture Mosul, the last IS-held city in the country, the jihadists "came to search for all members of the security forces", including 33-year-old Imed, his brother said.

The IS militants "were locals; they knew the houses and professions of all those they took", Fuad said.

Since then, he has had no news of his brother, but residents of Hamam al-Alil said they heard shooting at the grave site, a former Iraqi firing range near the town.

"For three days, from 7:00 to 11:00 pm, they executed" the people they had seized and then "dumped the bodies before partially covering them with dirt mixed with garbage" in what they termed "burials of dishonour", said Dargham Kamil, an official from the Martyrs' Foundation.

The organisation, which is under the authority of the Iraqi premier's office, has been working for over a month to trace how the killings unfolded, and has already collected many accounts from local residents.

Fuad can imagine what happened and now wants only one thing: to see the body of his brother, to know for sure.

"Only that can soothe our hearts," Fuad said.

But before that can happen, Iraqi and international teams will have to identify the remains, carrying out DNA tests once relatives have been found.

Additional investigation of the site is also needed "to see if there are any deeper layers, and therefore more bodies", said Dhia Karim, the Martyrs' Foundation official responsible for mass graves.

More bodies would add to hundreds already discovered in other mass graves left by IS jihadists, who overran swathes of territory north and west of Baghdad in 2014 but have since been pushed back by Iraqi forces.

Twenty-nine mass graves containing at least 1,600 bodies have been found in Sinjar, west of Mosul, since Iraqi Kurdish forces recaptured it last year, according to Mahma Khalil, the local official responsible for the area.

"A number of graves have not been discovered or searched yet," Abdulabbas said.

Amid the tumult of the IS assault,  fighting with Iraqi forces, summary executions and other abuses carried out by the jihadists, it "is very difficult to establish" the number of people who are missing", said Karim.

Karim and his teams have been working to collect testimony from witnesses and relatives of missing persons around the country.

"We will have to gather all this in a single database; it is a very long-term job," Abdulabbas said.

After which the evidence will have to be put in files and presented to the judicial system, which is already overwhelmed with similar cases from past years of violence in Iraq.

The legal process is of utmost importance "for national reconciliation", Abdulabbas said.

"Many of the people in (IS) are people from here," he said, and their brutality "could lead to revenge or vendettas between families".