'Engaged in spying': Iran writes to UN over US drone

Iranian military gave repeated radio warnings to US drone before downing it after it entered country's airspace, Sputnik reported. 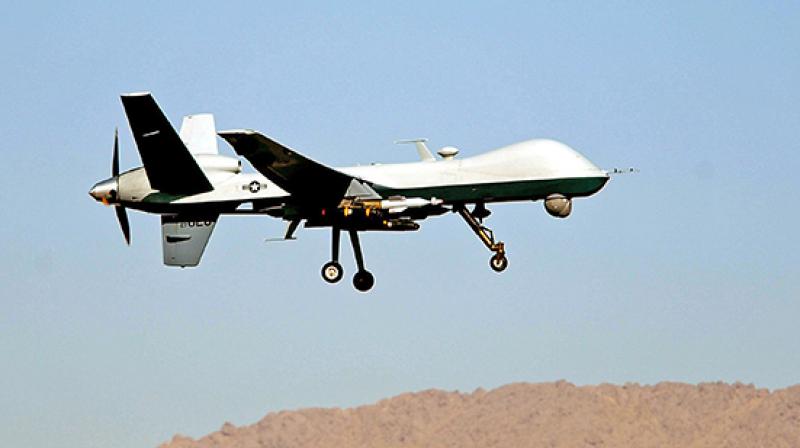 Iran on Thursday wrote to the United Nations, alleging that the US military drone shot by the Islamic Republic over the Strait of Hormuz was in a 'full stealth mode' and engaged in a spying operation. (Representational Image)

Tehran: Iran on Thursday wrote to the United Nations, alleging that the US military drone shot by the Islamic Republic over the Strait of Hormuz was in a "full stealth mode" and engaged in a spying operation.

"A US unmanned aircraft system, taken off from one of the bases of the US military forces in the South of the Persian Gulf, conducted an overflight through the Strait of Hormuz to Chabahar port in a full stealth mode as it had turned off its identification equipment and engaged in a clear spying operation", Iran's Ambassador to the UN Majid Takht Ravanchi, said in a letter to UN Secretary-General Antonio Guterres.

Ravanchi added that the Iranian military gave repeated radio warnings to the US drone before downing it after it entered the country's airspace, Sputnik reported.

"When the [US] aircraft was returning towards the western parts of the region near the Strait of Hormuz, despite repeated radio warnings, it entered into the Iranian airspace where the air defence system of the Islamic Republic of Iran, acting under Article 51 of the United Nations Charter, targeted the intruding aircraft at 04:05 hours local time on the same date at the coordinates N255943 and E570225 near the Kouh-e Mobarak region in the central district of Jask in the Islamic Republic of Iran", Ravanchi said in the letter.

The Ambassador called upon the international community to ask the US to "put an end to its continued unlawful and destabilizing measures in the already volatile region of the Persian Gulf."

The Iranian Revolutionary Guard Corps (IRGC) on Thursday announced that it had shot down an "intruding American spy drone", RQ-4 Global Hawk, after it violated Iranian airspace over the southern coastal province of Hormozgan. Washington has labelled the move an "unprovoked attack", claiming that the drone was flying over international waters when attacked.

To back its claim, the country released an image of the flight path, showing that the drone was flying over the international waters, in response to which Tehran released a video showing that the drone had entered the Iranian airspace. The two countries' respective proof is similar until the final moments before the unmanned aerial vehicle was shot down.