In 2006, the demolition of nine permanent houses in the same outpost led to clashes, & Mr Netanyahu was eager to avoid violence this time. 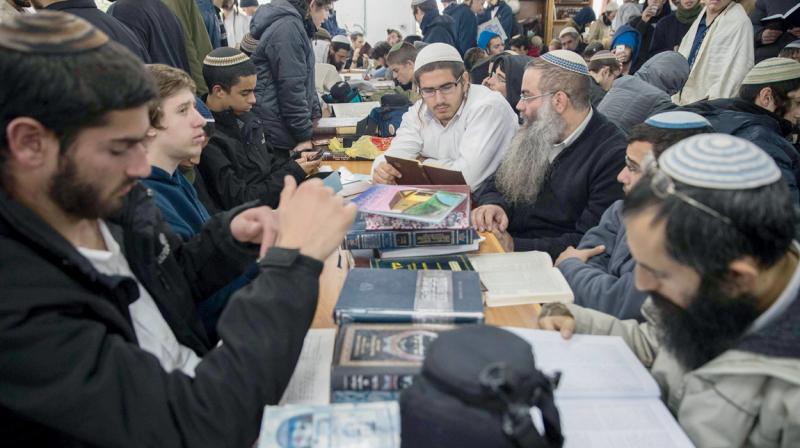 Israeli settlers pray in a synagogue in the settlement outpost of Amona. It was established in 1997 and built on private Palestinian land in the Israel-occupied West Bank. (Photo: AFP)

Amona Outpost: When a voice crackled from speakers on the cold and rainy West Bank hilltop finally announcing a deal, hundreds of young Jewish protesters who had camped out reluctantly started to leave.

The youths with dangling sidelocks and knitted skullcaps were suspending their campaign following Sunday’s agreement, but the power of their cause had already been made clear.

A long-running drama over the future of the small Jewish outpost of Amona in the occupied Palestinian territory, where the youths were protesting, has rocked Israeli politics and demonstrated the influence of the country’s far-right.

Though only 40 families live in mainly caravan homes on the hilltop, Prime Minister Benjamin Netanyahu’s government found itself tied in knots over how to remove them before a court-ordered December 25 deadline, resulting in Sunday’s deal.

The controversy has led to a wider debate over the future of the West Bank and of a two-state solution to the Israeli-Palestinian conflict, long the focus of peace efforts but a possibility many now see as fading.

Religious nationalists in Netanyahu’s coalition used Amona to push for the legalisation of several thousand other Israeli settler homes in the West Bank — a measure that may yet pass.

They also advanced their argument for what they would like to see happen over the long-term: Israel annexing most of the West Bank.

Some analysts see the argument as gaining more traction than ever, particularly with Donald Trump taking office as US president in January. “I believe that we are witnessing now a slow but clear move from both ends of the political rainbow toward serious consideration of the possibility of annexation of some of the (Palestinian) territories,” Yedidia Stern of The Israel Democracy Institute think-tank said.

Protect the land
Israeli settlements are seen as major stumbling blocks to peace efforts as they are built on land the Palestinians see as part of a future state of their own.

All are considered illegal under international law, but Israel differentiates between those it has approved and those it has not.

Settlements such as Amona are called outposts — those that Israel has not approved.

While it may seem unlikely that 40 families on a hilltop could wield such heavy influence, Amona became symbolic.

Mr Netanyahu was forced to move carefully even though the outpost was under the high court order to be evacuated, because it was found to have been built on private Palestinian land.

The settlers were refusing to leave, while their supporters from within and outside the government rushed to their defence.

In 2006, the demolition of nine permanent houses in the same outpost led to clashes, and Mr Netanyahu was eager to avoid violence this time.

When the residents rejected a government proposal last week that would have moved 12 of the families to a nearby plot, several hundred hardline youths filed into Amona to head off a feared imminent forced evacuation. By Sunday, they had drilled and welded fortifications inside Amona’s synagogue, with metal rods and chains put in place.