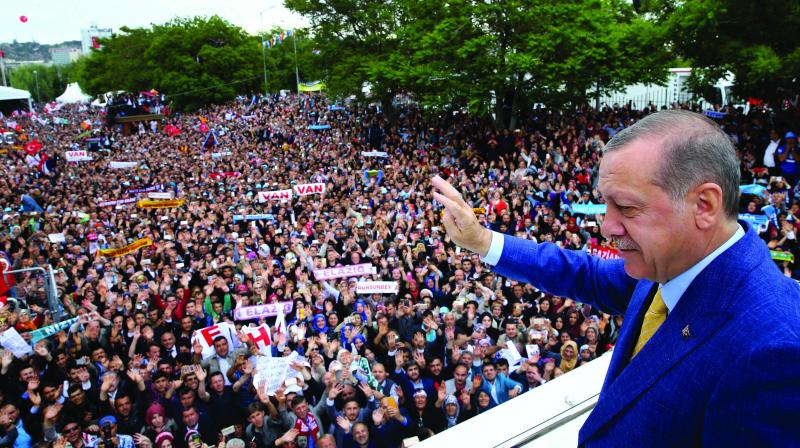 Turkish President Recep Tayyip Erdogan waves to supporters as he arrives for a congress of the ruling Justice and Development Party (AKP) in Ankara, Turkey. (Photo: AP)

In a precisely choreographed special congress in Ankara, the ruling Justice and Development Party (AKP) elected Erdogan, the only candidate, to replace Prime Minister Binali Yildirim as chairman.

Erdogan had rejoined the AKP on May 2 after a slim majority of voters on April 16 approved sweeping changes to create an executive presidency which critics fear could lead to one-man rule.

Under the old Constitution, the head of state had to sever ties with their political party and Erdogan in August 2014 left the AKP and stepped down as chairman after his election as President.

Taking the reins of the party will give Erdogan day-to-day control over its decision making, appointments and strategy as it prepares for elections in 2019. It also gives Erdogan responsibilities unmatched by any Turkish leader since 1950 with more new powers to come when the other changes agreed in the referendum to take effect from 2019.

Thousands of supporters from across Turkey crammed into the Ankara sports arena gave Erdogan a rock star-like reception at his first major party event since 2014.

“We are together again after three years,” Erdogan said in his candidate speech. “Our hearts were not divided... we lived as one heart.”

AKP deputy chairman Hayati Yazici announced Erdogan received 1,414 votes, to cheers from the audience. In a thank you speech, Erdogan vowed the congress would mark a “new start” for Turkey. “In the next few months, from the fight against terror to the economy, from expanding rights and freedoms to investments, in every field, this new period will be a leap for Turkey.”