Baghdadi’s speech was mainly focused on decline of American influence around the world and claimed credit on behalf of the Islamic State. 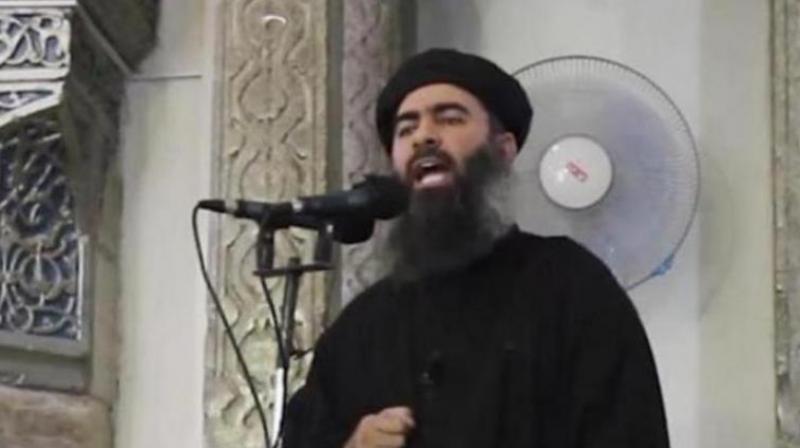 According to reports, there was no immediate confirmation that the voice which gave a 54-minute speech was Baghdadi’s. (Photo: File)

Beirut: The Islamic State leader Abu Bakr al-Baghdadi came out to deliver a message on Tuesday on Muslim’s Eid al-Adha holiday in which he urged his followers to continue and wage lone-wolf attacks in the West.

According to reports, there was no immediate confirmation that the voice which gave a 54-minute speech was Baghdadi’s. His last message was on September 28, 2017, with a similar tone, language, and exhortations.

Baghdadi acknowledged that there have been setbacks without directly referring to the fact that Islamic State has lost around 95 per cent of the land it seized in 2014.

"Seditions and hardships (are) increasing to their darkest night being cast over the people of Islam. The scale of victory or defeat ... is not tied to a city or village," he said.

America might have boasted of its "so-called victory in expelling the (Islamic) State from the cities and countryside in Iraq and Syria, but the land of God is wide and the tides of war change," he added.

The United States and its Syrian Kurdish allies are preparing for a final offensive against one of the last and most significant areas of Islamic State-controlled territory near the Iraqi border in Syria, where it is believed that Baghdadi is hiding.

The two recent reports by the United Nations and the US government suggest that there may be still 30,000 Islamic State fighters in Iraq and Syria.

Baghdadi’s speech was mainly focused on the decline of American influence around the world and claimed the credit on behalf of the Islamic State.

America "is living the worst period of its contemporary history," he said, attributing this to two decades of US war against Muslims. He cited the resistance of countries such as Russia, Iran, and Turkey to the Trump administration's policy of imposing sanctions against its foes as evidence that America is a waning power, "held in contempt" even by its allies.

Any setbacks suffered by the Islamic State are to be blamed on the Sunni Muslims, the sect the Islamic State claims to represent, who have collaborated with the West, Baghdadi said, citing recent defeats for moderate, Western-backed rebels in Syria as evidence.

He urged Islamic State supporters in the West to carry out more attack that has periodically set nerves on edge in the US, Europe, and Canada.

"Carry out an attack that breaks their heart, and rip them apart," he said. "Either with gunfire, or a stab to their bodies, or a bombing in their countries. Do not forget about running people over on the roads," he added.