'I am not jihadi John': German ISIS 'shoemaker' pleads to come home

Berlin is not known to have repatriated anyone, but Sufyan hopes he, his Syrian wife and their son can start afresh in Germany. 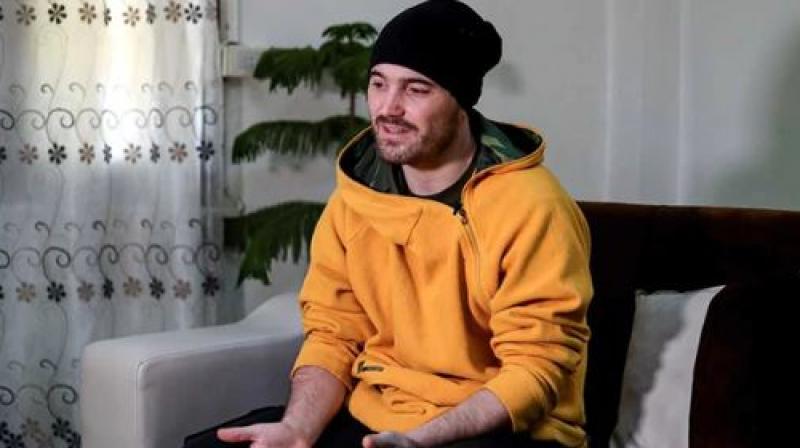 Sufyan was selected to speak to AFP by the Kurdish authorities, who detained him a year ago. (Photo; AFP)

Rmelan, Syria: From northern Syria, Muslim convert Sufyan is imploring his native Germany to take him back, having been captured years after joining the Islamic State group's so-called "caliphate".

His beard neatly buzzed, Sufyan is one of hundreds of foreigners held by the Kurdish People's Protection Units (YPG) in war-torn Syria, accused of fighting for IS.

The 36-year-old insists he was not a fighter, but a misguided civilian making orthopaedic shoes and prosthetics in IS territory.

"I am not Jihadi John, I am not Abu Bakr al-Baghdadi, I am not Adnani," said Sufyan, listing IS's infamous British executioner, its elusive chief, and its now-dead spokesman.

"I just made limbs," added the pale-skinned Sufyan, who refused to give his real name and said he was from Stuttgart in southwest Germany.

He was selected to speak to AFP by the YPG, who detained him around a year ago and were present during the interview.

They have refused to try accused foreign fighters in their custody, urging Western countries to take them back.

Some foreign governments have agreed to do so, but most are reluctant.

Berlin is not known to have repatriated anyone, but Sufyan hopes he, his Syrian wife and their son can start afresh in Germany.

"People make mistakes and I was naive," he said, dressed in a yellow hoody with a side zip, cargo pants, and black beanie.

"I just want to go back to my old life."

Speaking in near-fluent English peppered with Arabic words, Sufyan recounts his winding journey to what he thought would be a pious life under Islamic rule.

In 2014, IS declared a "caliphate" across large parts of Syria and neighbouring Iraq.

The following year, Sufyan travelled across Europe and Turkey, finally crossing into Syria in March 2015, four years into the Syrian war.

Once inside, he says, IS shuffled him among safe houses for weeks alongside Australians, Central Asians, and Russians.

He was given one month of military training and assigned to a battalion, but claims he never fought.

"I didn't fight and I didn't kill anyone," he said.

"I never killed any person in my life."

Instead, Sufyan was hired at a hospital in IS's de facto Syrian capital Raqa, using his 12 years' experience as an orthopaedic shoemaker.

"They teach me over there prosthetics. Until I came to YPG, I was doing this job... making prosthetic and orthopaedic shoes," he said.

In 2016, he married a Syrian woman from northwest Idlib, and they had a son.

They stayed in Raqa until YPG-led forces surrounded the northern city in 2017, forcing them to flee to the IS-held eastern town of Mayadeen.

Sufyan took up the same work there until Mayadeen came under attack, this time by the Russia-backed Syrian regime.

He said he had grown embittered towards IS by then and decided to pay a smuggler to bring him and his family to a YPG checkpoint.

"I was not ready to kill someone or to die, so I decided to go out," said Sufyan. "Everyone was running away."

A year later, Sufyan lives separated from his wife and son, who are detained in a Kurdish-run camp. He desperately wants to be reunited with his family.

Kurdish authorities say they have in their custody around 520 male foreign IS members, 550 women and around 1,200 children from 44 countries.

According to a European Parliament report in May, Germany estimates there are 290 children with claims to German citizenship in Iraq and Syria.

"If I can come back to Germany and if Germany want to punish me, I will accept this, to stay in prison," Sufyan told AFP.

"I hope it will not be a long sentence, because I miss already my wife and my son," he said.

He hopes to study or open his own business in his homeland, for which he has renewed appreciation since meeting Syrians who "see Germany as something like a paradise on earth".

Sufyan has written to his parents in Germany, who replied and also sent a letter and money to his wife.

Included in his parents' reply was a picture of a bicycle, which has kept Sufyan's hopes of returning home alive.

"My brain says, why will my mother and my father buy a bicycle for my son if he is in Syria? I hope I can go back to my country and make a new start."