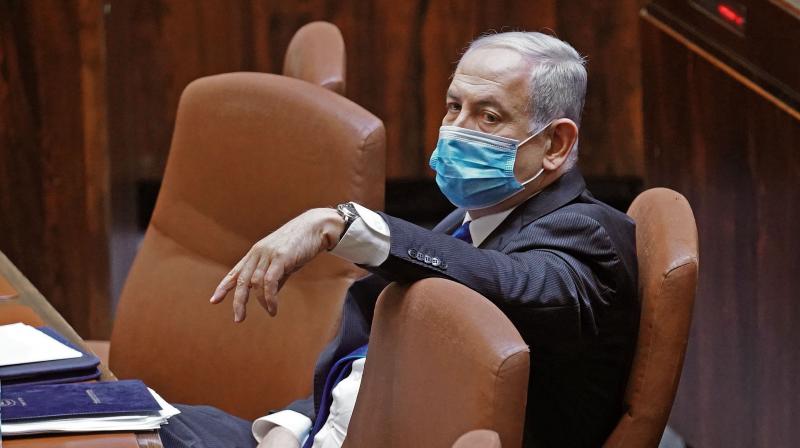 A handout picture released by the Israeli Knesset (parliament) spokesperson's office on May 17, 2020, shows Israeli Prime Minister Benjamin Netanyahu attending a parliamentary session in Jerusalem ahead of the swearing-in ceremony of the new government. (Via AFP)

After more than 500 days of electoral deadlock in which he fought for his political survival Netanyahu is to take his seat in the Jerusalem District Court for a new battle -- to stay out of prison and avoid a stain on his legacy.

The 70-year-old is used to setting precedents: he is the first Israeli prime minister born after the foundation of the state in 1948 and the longest-serving in its history.

But the impending trial is a deeply unwanted first.

In 2009, prime minister Ehud Olmert stepped down after police recommended he be indicted for graft.

He was later tried and convicted of taking bribes and sentenced to 27 months in prison, but was paroled after less than a year and a half.

Like Netanyahu, Olmert came from the right-wing Likud party, although he subsequently defected to the centrist Kadima.

Netanyahu is fighting tooth and nail to avoid Olmert's fate.

Among the charges he faces is that he sought to illegally trade favours in exchange for positive coverage for himself in Yediot Aharonot, Israel's top-selling newspaper.

He is also accused of accepting cigars, champagne and jewellery worth 700,000 shekels (180,000 euros) from wealthy personalities in exchange for favours.

Perhaps most serious of all is the claim that Netanyahu offered media mogul Shaul Elovitch regulatory changes worth millions of dollars to his telecom giant Bezeq in exchange for favourable reporting on the Walla! news website.

That charge is also the most complex, said Amir Fuchs, a researcher at the Israel Democracy Institute, who says it differs from "classic" bribery cases where money changes hands.

In this case, Fuchs argued, the allegation is that Netanyahu "is getting only media coverage," rather than cash.

"It is unprecedented," he told reporters.

But in the Bezeq case, Fuchs adds, Netanyahu is accused of doing far more than seek flattering write-ups.

"It was actually complete editorial control of this site even on the specifics of which posts to make, or which pictures to make."

Netanyahu denies all the accusations and claims he is the victim of a witch hunt by the media and legal officials.

After months of suspense and repeated police questioning of Netanyahu, Attorney General Avichai Mandelblit in January filed charges against the premier.

Many commentators considered this the premier's political death warrant.

But Netanyahu retained the Likud leadership and after three inconclusive general elections managed to hammer out a power-sharing deal with his chief rival Benny Gantz.

Under the agreement, Netanyahu will continue to lead the government for 18 months before handing over the premiership to Gantz.

Netanyahu's trial had been due to open in mid-March, but the COVID-19 pandemic lead to a postponement to May 24, and the proceedings will be marked by social-distancing and other hygiene measures.

Netanyahu's lawyers requested that he be excused from appearing in person on Sunday afternoon (1200 GMT) at the opening of a trial that will stretch over months or even years with possible appeals.

They argued that his attendance, to hear the formal reading of the charges against him and confirm that he has read and understands them, was merely technical.

But the court rejected the request, citing a clause in Israeli criminal law stating that "a person may not be tried on criminal charges except in his presence."

Under Israeli law, a sitting prime minister does not have automatic immunity from prosecution but also is not obliged to resign when charged, only when convicted and after all avenues of appeal have been exhausted.

Yuval Shany, professor of law at the Hebrew University of Jerusalem, argues that there is "a basic incompatibility" between Netanyahu's role as head of the government and his status as a criminal defendant.

In the latter role, Shany says, the premier will be "fighting very aggressively and maybe effectively to weaken the government authorities that are prosecuting him".

"There is a very serious conflict of interest situation," he said.

Once the trial is under way the three judges selected by the Supreme Court will be able to demand Netanyahu's presence in court when they consider it necessary.

At any time before the verdict Israeli law allows Netanyahu to change his plea in exchange for lesser or fewer charges.

Such plea bargains are common in Israeli courts.