Five things to know about the Hagia Sophia

The conversion of the edifice, once an important church of Christendom and 'jewel' of Byzantine Empire, has led to an international outcry 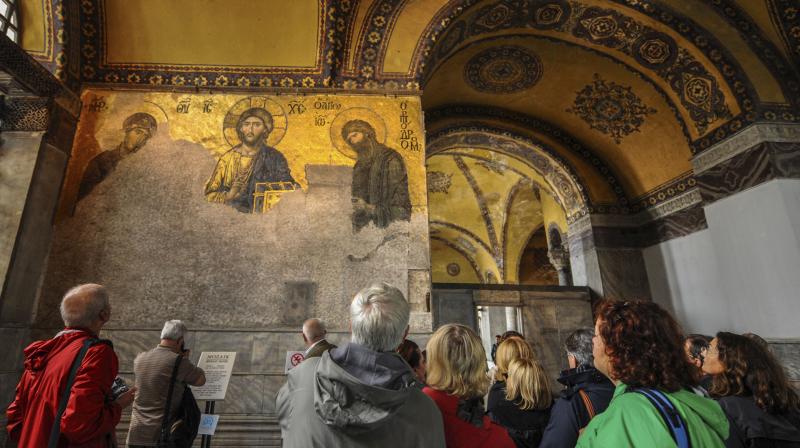 Visitors look at mosaics inside the Byzantine-era Hagia Sophia, in the historic Sultanahmet district of Istanbul.Turkish President Recep Tayyip Erdogan is scheduled to join hundreds of worshipers Friday, July 24, 2020, for the first Muslim prayers at the Hagia Sophia in 86 years, weeks after a controversial high court ruling paved the way for the landmark monument to be turned back into a mosque. The mosaics will be covered up with curtains during the prayers, officials have said. (AP)

Istanbul: Turkish President Recep Tayyip Erdogan will on Friday participate with hundreds of people in the first Muslim prayers at Hagia Sophia since a top court revoked the Istanbul landmark's museum status.

Here are five things to know about the Hagia Sophia:

What is the Hagia Sophia?

The edifice was first built as an Orthodox Christian cathedral between 532 and 537 AD under emperor Justinian I and is considered the most important Byzantine structure.

After the Ottoman conquest of Constantinople (now Istanbul) in 1453, it was converted into a mosque before being opened as a museum in 1935 after the secular modern Turkish republic was established in 1923.

It was added to the list of UNESCO world heritage sites in 1985.

Until now it has been the principal tourist attraction in Turkey, hosting millions of visitors every year -- 3.8 million in 2019.

What is its official status?

Following the July 10 decision, it reverts from being a museum to a mosque.

The Council of State, Turkey's highest administrative court, unanimously cancelled a 1934 cabinet decision and said Hagia Sophia was registered as a mosque in its property deeds.

There have been more religious activity inside the museum in recent years -- Erdogan recited the first verse of the Koran there in 2018.

As early as 1994 when he was running for mayor of Istanbul, Erdogan had promised to open the building to Muslim worshippers.

The main opposition party has accused the government of using the issue to distract voters from economic woes and other issues during the coronavirus pandemic.

What about Byzantine heritage?

Experts were concerned after the ruling for the future of the Byzantine mosaics depicting Christian figures, but the government has sought to offer reassurances that they will be protected.

Turkey's religious affairs agency said the mosaics would be hidden during prayers with curtains since Islam prohibits any figurative representation.

Outside of worship hours, they will be visible to visitors.

What will change for visitors?

Turkish officials insist tourists will still be able to visit the Hagia Sophia, just as they are able to see the Blue Mosque nearby.

Erdogan said the building would remain open to all, including non-Muslims.

Tourists will now even be able to visit the building for free, compared to previously when they had to pay for entry to the museum.

What is the international community's position?

The landmark ruling has already inflamed tensions not just with the West and Turkey's historic foe Greece, but also Russia, with which Erdogan has forged an increasingly close partnership in recent years.

Turkey-Greece relations are already strained over migration and drilling in the eastern Mediterranean.

Greece branded the move an "open provocation to the civilised world", while the Russian Orthodox Church said Turkey had ignored "millions of Christians" with its move.

The United States had also urged against altering its status. Pope Francis said he was "very distressed" over the change.

The UN's cultural agency UNESCO said it deeply regretted Turkey's decision, which was "taken without prior dialogue".