Israel has bombed the coastal Palestinian strip, which is ruled by Hams, almost daily since August 6 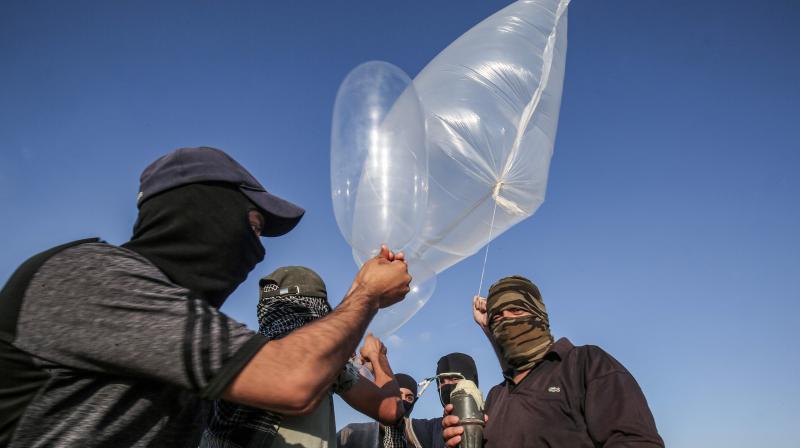 Palestinians attach an incendiary device to inflated plastic bags and condoms to be directed and flown towards Israel, near Rafah along the border between the Gaza Strip and Israel. (AFP)

Jerusalem: As US Secretary of State Mike Pompeo started a Middle East tour in Israel on Monday, Islamist group Hamas called on regional leaders to "break their silence" on Israel's blockade of Gaza.

Israel has bombed the coastal Palestinian strip, which is ruled by the group, almost daily since August 6, while balloons carrying fire bombs and, less frequently, rocket fire have hit Israel from Gaza.

In retaliation for the balloon attacks and the widespread blazes on farms and scrubland they have caused, Israel has tightened its 13-year blockade of Gaza's two million inhabitants.

It has banned Gaza fishermen from going to sea and closed its goods crossing with the territory, prompting the closure of Gaza's sole power plant for want of fuel.

Hamas in a statement called the closure of the Kerem Shalom crossing a "crime against humanity" and called on the international community and "decision-makers in the region" to "break their silence to bring an end" to the blockade.

Hamas also said that the normalisation of relations between Israel and the United Arab Emirates helps "maintain crimes and violations" against the Palestinians.

Pompeo touched down in Tel Aviv Monday morning to kick off a five-day trip to the Middle East.

His visit will focus on Israel's normalising diplomatic ties with the UAE, seen as a betrayal by many Palestinians, and urging other Arab states to follow suit.

Earlier Monday the Israeli army said it had again hit Hamas targets in the Gaza Strip overnight, in retaliation for incendiary balloon and rocket attacks launched from the Palestinian enclave.

An Egyptian delegation has been trying to broker a return to an informal truce.

"During the day, explosive and arson balloons were launched from the Gaza Strip into Israel," an army statement said.

"In response ... fighter jets, tanks and aircraft struck military posts and underground infrastructure" belonging to Hamas in the southern Gaza Strip, it said.

On Thursday night, Gaza militants fired a dozen rockets at Israel, which responded with air strikes on a rocket-manufacturing plant and underground infrastructure.

Egypt has acted to calm repeated flare-ups of violence in recent years to prevent any repetition of the three wars Israel and Hamas have fought since 2008.