'The very idea of ​subversive art that society could rejoice in as a manifestation of freedom and creativity is alien to them.' 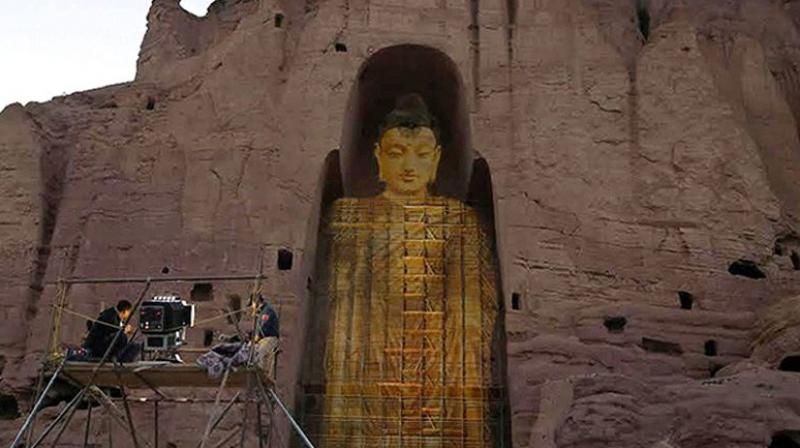 In March 2001, Taliban leader Mullah Omar ordered the destruction of two 1,500-year-old Buddha statues in the eastern town of Bamiyan, because they were judged to be anti-Islamic. (Photo: AP)

Paris: Jihadists from the Islamic State group have destroyed ancient sites and museum pieces in Syria and Iraq in the last two years but that is just the latest example of extremists attacking religious buildings or art.

Historian Francois Boespflug, a French former Catholic priest, tells AFP about the roots of attacks against images that the perpetrators consider to be blasphemous or idol worship.

Question: What is the common thread between the destruction of the giant Buddhas of Bamiyan in Afghanistan by the Taliban in 2001, the mausoleums of Timbuktu in Mali by Al-Qaeda-linked militants and two of the most important temples in the Syrian city of Palmyra by militants from the Islamic State group?

Answer: "When an image is considered to convey contempt or is the object of a cult that extremists consider fetishist, they react as if they have been insulted themselves. Destroying artefacts in (the Iraqi city of) Mosul should be the least of the jihadists' strategic concerns. They do it because they want to cultivate their reputation as ultra-pious Muslims, faithful to the Koran -- condemning idols is almost a leitmotiv. But it has a double bonus for the extremists because it allows them to thumb their noses at the West and to all those who love art for art's sake.

Question: Divine representation is banned in the Holy Scriptures, so how does one explain how Christianity has created such a large body of artistic work, in churches, for example?

Answer: "In fact Christianity started off, for two centuries, without any images, keeping true to the Jewish tradition. Judaism, because it has never been in the position of the dominant political power, has been far less iconoclastic. The two religions which have been the most iconoclastic are Islam and Christianity -- in the case of the latter, with the destruction of effigies of pagan gods. But Christians then felt liberated from the ban set out in the Ten Commandments -- insofar as God became man, it seemed almost contrary to the incarnation never to represent him.

In name of blasphemy

Question: This relative tolerance from the Catholic Church has not prevented Catholic fundamentalists from violently rejecting works of art. What is behind this?

Answer: "Most Christian extremists who act in this way claim they do so because of blasphemy. But this concept of blasphemy has been gradually removed from the criminal law of most European nations. In the Christian religion there is a kind of hierarchy of images to be respected: God the Father and Jesus are at the top, then comes the Virgin Mary with child... While the scenes in Jean-Luc Godard's film 'Hail Mary' (note: in which the director brings a virgin birth into a modern setting) were quite modest, protesters who set fire to a cinema showing the film in the French city of Tours in 1985 were expressing an attitude of 'get your hands off the Holy Mary'."

Question: On the other hand, are fundamentalist groups ever tempted to transform art into an instrument of influence or propaganda?

Answer: "Many of these movements do so by adopting a form of pious spreading of the Christian message, using representations that do not even purport to be artistic - they are Sulpician images, a little kitsch. You find them in the United States among Pentecostal movements or in the Mormon faith, whose iconography is dripping with sentimentality. They feel rather uncomfortable about abstraction of the sort you find in the Rothko Chapel in Texas (note: which is hung with 14 paintings by the artist Mark Rothko), with its large quintessential flat surfaces.

"We have to understand that religious art has a function that is not primarily about wrongdoing, but rather about instruction, emotion and recollection. If our age wanted to believe that religion was compatible with provocation, it's noticeable that most Christians show no interest in contemporary art forms!

"As for extreme Islamists, the very idea of ​subversive art that society could rejoice in as a manifestation of freedom and creativity is alien to them. Instead, the message is rather 'we are going to install sharia law on the face of the Earth'... We have to read into their acts of destruction something rather more than just a few extremists protesting against a play in Paris (because of its content)."