Police have arrested a number of people in connection with the fires across the country. 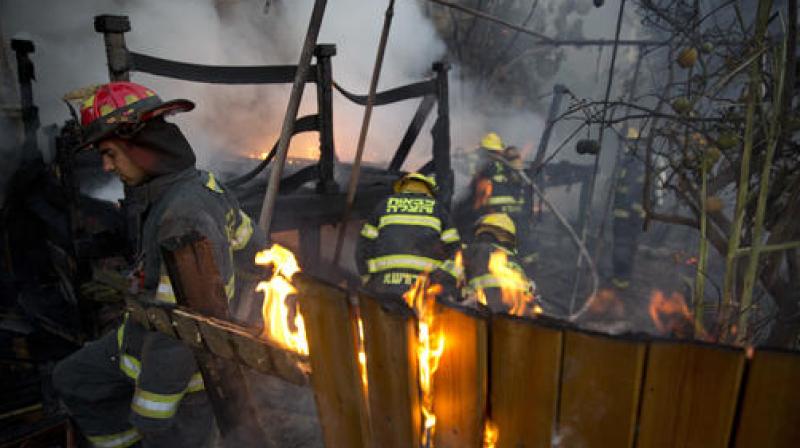 A wildfire roared through parts of Israel's third-largest city on Thursday, forcing tens of thousands of people to evacuate their homes. (Photo: AP)

Jerusalem: Hundreds of people were evacuated from an Israeli village near Jerusalem overnight, police said on Friday, as firefighters battled wildfires that have forced tens of thousands to flee around the country.

The evacuations in Beit Meir, a cooperative village of religious Jews, came after 60,000 people in Israel's third-largest city Haifa were moved to safety on Thursday because of a spate of fires.

Rosenfeld said that a suspect had been arrested in connection with the blaze, but did not elaborate.

Police have arrested a number of people in connection with the fires across the country.

Some are suspected of criminal negligence leading to accidental fires in tinder-dry woodland and undergrowth, while there are also suspicions that some may have been deliberate and related to the Israel-Palestinian conflict.

Police on Friday morning reported the outbreak of a new fire near the southern town of Kiryat Gat.

In the north, thousands of residents of the mixed Jewish-Arab coastal city of Haifa spent the night in temporary accommodation.

The Haifa fires were "under control" on Friday morning, Rosenfeld said, but he cautioned that "things can change and develop as we speak."

"At the moment, (Haifa) residents who were evacuated from their homes are not allowed to go back," police spokeswoman Luba Samri said in a statement.

Entire neighbourhoods of the port city have been evacuated, along with Haifa University and local prisons.

Meteorologists say a long dry summer and so-far rainless autumn have brought about ideal conditions for fires to spread whether sparked by accident or on purpose.