Iran, Russia warns US after House votes for new sanctions

European firms working with the Russian energy sector, however, fear that the bill could end up hitting them. 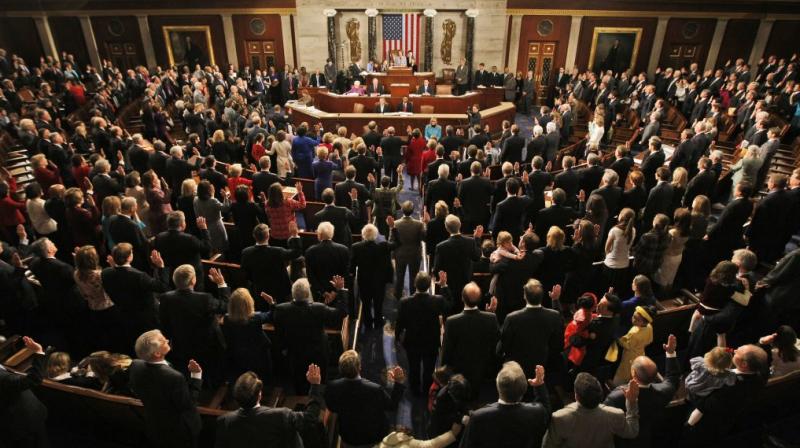 US House of Representatives. (Photo: AP)

Tehran: President Hassan Rouhani said on Wednesday that Iran would respond in kind to any breach by the United States of the 2015 nuclear deal after the House of Representatives passed a new sanctions bill.

The Iranian parliament's national security and foreign affairs committee said it would hold an extraordinary session on Saturday to discuss its response.

The parliament voted earlier this month to fast-track a bill introduced in June that would increase funds for Iran's missile programme and Revolutionary Guards.

"We must always develop our defence capability and we will strengthen our defensive weapons regardless of the opinion of others," Rouhani said.

The US House passed a new sanctions bill on Tuesday targeting Iran's Revolutionary Guards, as well as Russia and North Korea.

Iran's deputy foreign minister Abbas Araghchi said the bill was "very clearly a hostile measure" even if it was only "a compilation of previous US sanctions in the non-nuclear fields".

Araghchi led the negotiating team that reached the deal with world powers in 2015 known as the JCPOA, under which Iran agreed to strict limits on its nuclear programme in exchange for an easing of sanctions.

The new sanctions bill "can influence the successful implementation of the JCPOA and reduce Iran's benefits under the JCPOA," Araghchi said.

"That's why it is incompatible with various sections of the JCPOA which the US has committed to implement with good intention and in a constructive atmosphere," the ISNA news agency quoted him as saying.

The UN and other signatories to the nuclear deal have agreed that Iran has stuck to its commitments, which has been reluctantly accepted by the administration of President Donald Trump.

"The new US administration has been forced to confirm Iran's loyalty to the deal twice within the past six months and it has had no other option as the IAEA (International Atomic Energy Agency) in various reports has clearly expressed Iran's compliance with its commitments," Araghchi said.

Meanwhile, Russia on Wednesday also raised the prospect of retaliation after an overwhelming vote by the US House of Representative to impose new sanctions left President Donald Trump facing a tough call.

The sanctions package, which also targets Iran and North Korea, "tightens the screws on our most dangerous adversaries in order to keep Americans safe," House Speaker Paul Ryan said after it passed Tuesday by 419 votes to three.

It now heads to the Senate before Trump faces the tricky choice of whether to veto the bill, which has been opposed by the White House and considerably constrains his ability to lift the penalties.

There is broad support in the Senate for the tougher measures, but debate about whether to include penalties on North Korea.

The legislation is the result of a congressional compromise reached last weekend and is aimed at punishing the Kremlin for allegedly interfering in the 2016 US presidential election and intervening in Ukraine.

European firms working with the Russian energy sector, however, fear that the bill could end up hitting them.