A confirmed launch of the "Simorgh" rocket would mark another step forward for the Islamic Republic's young space program. 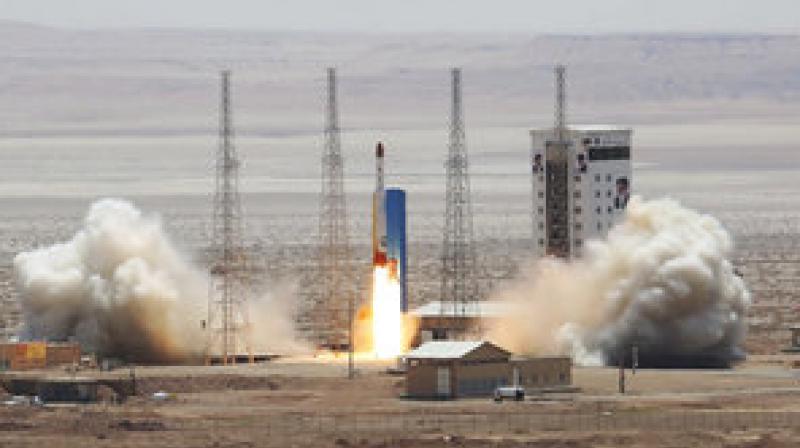 Iran claims to show the launching of Simorgh satellite-carrying rocket in an undisclosed location (Photo: AP)

Tehran: Iran successfully launched its most advanced satellite-carrying rocket into space, the country's state media reported Thursday, in what is likely the most significant step yet for the launch vehicle.

A confirmed launch of the "Simorgh" rocket would mark another step forward for the Islamic Republic's young space program, but is likely to raise alarm among its adversaries, who fear the same technology could be used to produce long-range missiles.

The US State Department called the launch "provocative."

Iranian state television said the rocket, whose name means "phoenix" in Persian, is capable of carrying a satellite weighing 250 kilograms (550 pounds). The report did not elaborate on the rocket's payload. Other state-linked agencies including the semi-official Fars news agency also described the launch as successful.

Media reports did not say when the launch took place at the Imam Khomeini National Space Station in Semnan, some 220 kilometers (138 miles) east of Tehran.

Iran frequently announces technological breakthroughs that are difficult to independently verify. It has carried out multiple tests of short- and medium-range ballistic missiles as well as other domestically produced weapons over the years.

The Simorgh is a two-stage rocket first revealed in 2010. It is larger than an earlier model known as the Safir, or "ambassador," that Iran has used to launch satellites on previous occasions.

The launch comes as the United States has criticized Iran's ballistic missile tests, which American officials argue violate the spirit of the 2015 nuclear deal that Iran struck with world powers. Under the agreement, which does not expressly prohibit missile tests, Iran agreed to limit its uranium enrichment program in exchange for the lifting of economic sanctions. The US said Thursday that such a rocket is inherently designed to be able to carry a nuclear warhead.

Iran has pursued a satellite launch program for years. The US and its allies worry that the same technology could be used to develop long-range missiles.

The country has sent several short-lived satellites into orbit over the past decade, and in 2013 launched a monkey into space. But it recently abandoned plans to potentially send humans into orbit, saying in late May that the cost of doing so was prohibitive.

The US National Air and Space Intelligence Center said in a report released last month that the Simorgh could act as a test bed for developing the technologies needed to produce an intercontinental ballistic missile, or ICBM.

"Tehran's desire to have a strategic counter to the United States could drive it to field an ICBM. Progress in Iran's space program could shorten a pathway to an ICBM because space launch vehicles (SLV) use inherently similar technologies," the report said.

Iran's satellite-launch program falls under the responsibility of the defense ministry, which has denied that the space program is a cover for weapons development.

The head of Iran's space agency in October expressed for the first time interest in cooperating with NASA. Iran has offered to share its scientific findings and satellite data with other countries.

Iran's most recent known successful satellite rocket launch was in February 2015, when it put an imaging satellite known as "Fajr" into orbit. That launch happened while Iran was negotiating the nuclear deal.

It is believed to have carried out at least a partial test of the Simorgh rocket last year, though the exact details of that attempt were never made public.

Iran's decision to announce the rocket launch now likely serves as a test of America's reaction, said Behnam Ben Taleblu, a senior Iran analyst with the Washington-based Foundation for Defense of Democracies, a conservative think tank long critical of the nuclear deal.

Taleblu said the launch announced Thursday had implications not only on Iran's ability to launch satellites, but also in possibly building intercontinental ballistic missiles.

If Iran begins working on heat shields and other technology allowing for a rocket's payload to re-enter Earth's atmosphere, that would be a major warning sign, he said.

"This will take time, but the Iranian ballistic missile, nuclear, and space program shows that slow and steady always wins the race," Taleblu said.

Asked about the Iran missile tests, China's UN Ambassador Liu Jieyi, the current president of the UN Security Council, said that it was not "within the scope" of the 2015 nuclear agreement between Iran and world powers.

"I think what's important is that the agreement continues to be implemented and all the sides make constructive efforts to resolve whatever issues that still exist, and to completely and comprehensively implement the agreement," Liu told reporters at UN headquarters in New York.