However, the message of the drill seems to be targeted at the United States, which saw two American bases go on alert over the launches 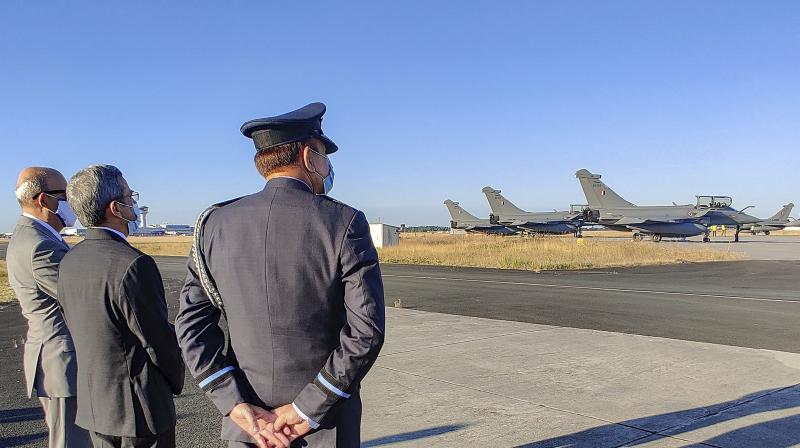 Ballistic missile fire detected from the drill resulted in American troops being put on alert at Al-Dhafra Air Base in Abu Dhabi. (Representational Image: PTI)

Tehran: Iran's paramilitary Revolutionary Guard launched underground ballistic missiles as part of an exercise involving a fake aircraft carrier in the Strait of Hormuz, state television reported Wednesday, the latest barrage in a drill that saw two American bases temporarily go on alert over the launches.

Ballistic missile fire detected from the drill resulted in American troops being put on alert at Al-Dhafra Air Base in Abu Dhabi in the United Arab Emirates and Al-Udeid Air Base, the forward headquarters of the US military's Central Command in Qatar, the military said. Troops sought cover during that time.

Al-Dhafra also is temporarily home to five French-built Rafale fighter jets on their way to India for that country's air force.

Drones separately targeted the bridge of the fake aircraft carrier, according to the state TV report.

The TV did not immediately air footage of the launches or the drone attack, nor did it identify the missiles used in the drill.

However, the message of the drill was clearly targeted at the United States.

A semiofficial news agency close to the Guard published a graphic overnight that photoshopped the image of an American carrier into the shape of a casket, with a caption quoting Supreme Leader Ayatollah Ali Khamenei pledging to seek revenge for the US drone strike that killed a top Iranian general in January.

The drill and the American response to it underlined the lingering threat of military conflict between Iran and the US after a series of escalating incidents last year led to the January drone strike. Tehran responded to that strike by firing ballistic missiles that wounded dozens of American forces in Iraq.

While the coronavirus pandemic has engulfed both Iran and the US for months, there has been a growing confrontation as America argues to extend a yearslong UN weapons embargo on Tehran that is due to expire in October.

Iranian commandos fast-roped down from a helicopter onto the replica in the footage aired Tuesday from the exercise called Great Prophet 14. Anti-aircraft guns opened fire on a target drone near the port city of Bandar Abbas.

State television footage also showed a variety of missiles being fired from fast boats, trucks, mobile launchers and a helicopter, some targeting the fake carrier.

A commander said the Guard, a force answerable only to Khamenei, planned to fire "long-range ballistic missiles" as well during the drill that continued Wednesday.

"The incident lasted for a matter of minutes and an all clear was declared after the threat ... had passed," said US Army Maj. Beth Riordan, a Central Command spokeswoman.

Both bases are hundreds of kilometers (miles) away from where Iran put the replica aircraft carrier.

Other footage from the exercise aired by Iran's state television showed fast boats encircling the mock-up carrier, kicking up white waves in their wake.

While Iran's naval forces are dwarfed by the US Navy, its commanders practice so-called swarm tactics aimed at overwhelming the US carriers that pass through the strait on their way in and out of the Persian Gulf.

It wasn't immediately clear if all the footage was from Tuesday, as one overhead surveillance image that appeared to be shot by a drone bore Monday's date.

The exercise had been expected as satellite photos released Monday showed the fake carrier being moved into place by a tugboat.