Kabul control slips in Afghanistan amid US talks with Taliban

SIGAR said the US has dramatically increased air strikes, dropping 6,823 bombs in the first 11 months of 2018. 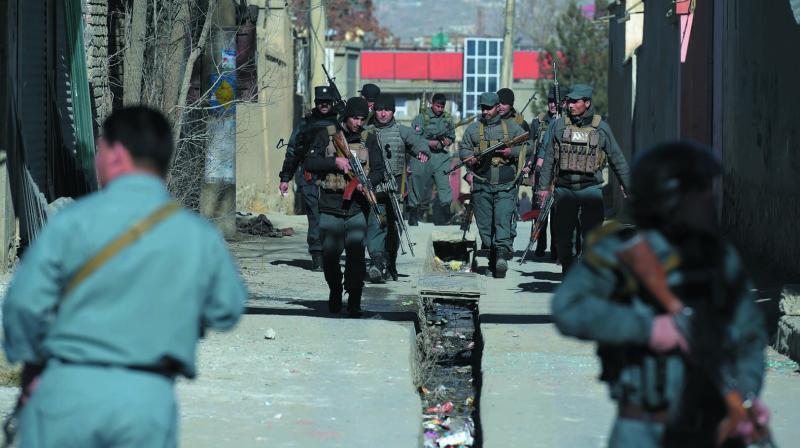 SIGAR said just 53.8 per cent of Afghanistan's 407 districts are in government hands, and experts on Afghanistan say the number is lower still. (Photo: AFP)

Washington: The Kabul government is steadily losing its grip over parts of Afghanistan even as American forces intensify their air campaign against insurgent groups, a US government watchdog said on Thursday.

The latest grim assessment of Afghanistan's security situation comes as the US pursues talks with the Taliban and urgently seeks a way out of the 17-year war.

Numbers provided by Resolute Support, the US-led NATO mission in Afghanistan, show that as of October 31, only 63.5 per cent of Afghans are living in areas controlled or influenced by the Kabul government -- down from 65.2 per cent the previous quarter.

According to the US Special Inspector General for Afghanistan Reconstruction (SIGAR), which compiled the data, the decrease came as Kabul's control or influence over Afghan districts dropped.

SIGAR said just 53.8 per cent of Afghanistan's 407 districts are in government hands, and experts on Afghanistan say the number is lower still.

Instead of looking at population metrics, the Pentagon in a response to SIGAR said it is more important to "focus on the principal goal of the strategy of concluding the war in Afghanistan on terms favourable to Afghanistan and the United States."

Officials pointed to ongoing talks between the Taliban and US special envoy Zalmay Khalilzad, who this week said he had sealed the outlines of a peace deal. Highlighting the ongoing security crisis, SIGAR said the US has dramatically increased air strikes, dropping 6,823 bombs in the first 11 months of 2018.

Meanwhile, the strength of Afghan security forces has continued to dwindle, and currently stands at 308,693 personnel. That means only 87.7 per cent of positions are filled, the lowest level since January 2015.

Afghan forces have suffered staggering losses since they assumed responsibility for their country's security four years ago. President Ashraf Ghani last week said 45,000 security forces have been killed since he took office in September 2014. NATO combat forces pulled out at the end of that year, and observers say the losses may not be sustainable. Officials say President Donald Trump has decided to pull half of America's forces from Afghanistan. The Pentagon insisted the numbers in SIGAR's report do not necessarily reflect poorly on his strategy to find an end to the conflict. "Measures of population control are not indicative of effectiveness of the South Asia strategy or of progress toward security and stability in Afghanistan," the Pentagon said, according to SIGAR.

Khalilzad has provided few specifics about a potential deal with the Taliban, but the militants are believed to have promised not to provide shelter again to foreign extremists.

However, the Taliban have so far refused another key US demand -- that they talk to the internationally recognized government in Kabul, which the insurgents view as American "puppets."

Ghani has warned against rushing into a deal, citing violence following the Soviet withdrawal in 1989. Acting Defence Secretary Patrick Shanahan said Tuesday that he saw "some very encouraging possibilities" in Khalilzad's negotiations.

"But we need to give them time and space," Shanahan said. Ryan Crocker, a former US ambassador to multiple nations including Afghanistan, said in an opinion piece in The Washington Post that US negotiations with the Taliban are akin to "surrender."

"The Taliban will offer any number of commitments, knowing that when we are gone and the Taliban is back, we will have no means of enforcing any of them," Crocker wrote.