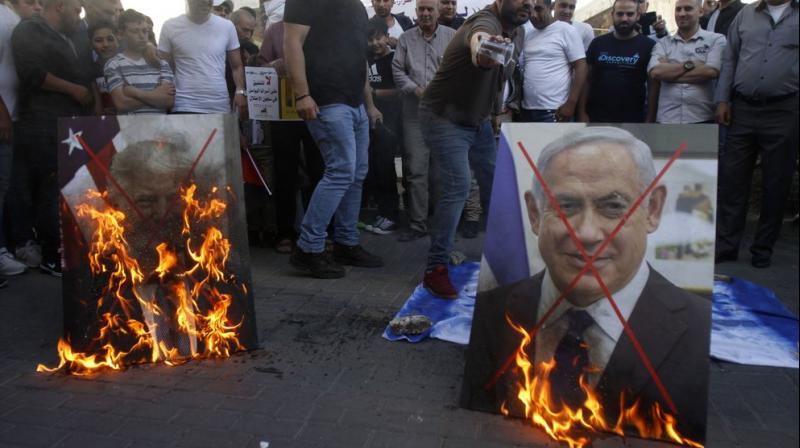 Jerusalem: Israeli police shot dead an unarmed autistic Palestinian man in Jerusalem’s Old City on Saturday after saying they suspected he was carrying a weapon.

The shooting drew broad condemnations and revived complaints alleging excessive force by Israeli security forces. On social media, some compared the shooting to police violence in the U.S.

Relatives identified the deceased man as Iyad Halak, 32. They said he suffered from autism and was heading to the school for students with special needs where he studied each day when he was shot.

In a statement, Israeli police said they spotted a suspect “with a suspicious object that looked like a pistol.” When he failed to obey orders to stop, officers opened fire, the statement said. Police spokesman Micky Rosenfeld later said no weapon was found.

Channel 12 said members of Israel’s paramilitary border police force fired at Halak’s legs and chased him into a dead-end alley. It said a senior officer ordered a halt in fire as they entered the alley, but that a second officer did not listen and fired six or seven bullets from an M-16 rifle, killing Halak. The report said both officers were taken into custody and interrogated for several hours.

AP video from the scene showed three bullet holes in a white wall at the end of the alleyway.

Halak’s father, Kheiri, said police raided the family’s home after the shooting. “They found nothing,” he said, claiming that police had cursed his daughter when she became upset at them.

Lone Palestinian attackers with no clear links to armed groups have carried out a series of stabbings, shootings and car-ramming attacks in recent years.

Palestinians and Israeli human rights groups have long accused Israeli security forces of using excessive force in some cases, either by killing individuals who could have been arrested or using lethal force when their lives were not in danger.

“We must resist the expected cover-up and make sure that the police will sit in jail,” Ayman Odeh, the leader of the main Arab party in parliament, wrote on Twitter. “Justice will be done only when the Halak family, their friends and the rest of the Palestinian people know freedom and independence.”

On social media, some pro-Palestinian activists compared the shooting to this week’s killing of George Floyd, a handcuffed black Minnesota man who pleaded for air as a white police officer pressed a knee on his neck. His death has set off violent protests across the U.S.

“The death of a young person with special needs is heartbreaking and all of Israel bows their heads. This is not our way,” he tweeted.

In west Jerusalem, about 150 protesters, some pounding drums, gathered to demonstrate against police violence. “A violent policeman must stay inside,” they chanted in Hebrew. At a smaller protest in Tel Aviv, one poster read “Palestinian lives matter.”

The shooting came a day after Israeli soldiers killed a Palestinian in the occupied West Bank who they said had tried to ram them with his vehicle. No Israelis were wounded in either incident.

Saturday’s shooting occurred in east Jerusalem, which Israel captured in the 1967 war along with the Israeli-occupied West Bank and the Gaza Strip. The Palestinians want all three territories for their future state.

Tensions have risen in recent weeks as Israel has pressed ahead with plans to annex large parts of the West Bank in line with President Donald Trump’s Middle East plan, which strongly favours Israel and was rejected by the Palestinians. Netanyahu has said he plans on moving ahead with the plan in July.

The Palestinian Authority, which governs autonomous enclaves in the West Bank, said last week that it was no longer bound by past agreements with Israel and the United States and was cutting off all ties, including longstanding security coordination, to protest the annexation plan.

The Trump plan would allow the Palestinians to establish a capital on the outskirts of the city, beyond Israel’s separation barrier. It would grant them limited statehood in a cluster of enclaves surrounded by Israel, but only if they meet a long list of stringent conditions.

The annexation plan has also drawn widespread condemnations from Israeli allies in Europe and across the Arab world.