'Not guilty', top aide to Pope Francis said loudly, without hesitation when asked his plea, a stance he has taken since first being charged. 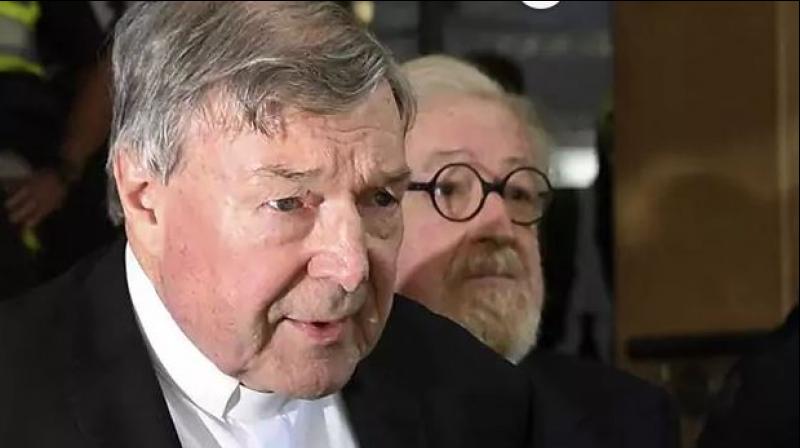 The 76-year-old was impassive throughout the hearing in Melbourne that ordered him to face a jury on "multiple" charges, although half of the allegations against him, including some of the most serious, were thrown out. (Photo: AFP)

Melbourne: Vatican finance chief Cardinal George Pell became the highest-ranked Catholic ever to be sent to trial over historic sex offences Tuesday, with the elderly priest vowing to fight the charges.

The 76-year-old was impassive throughout the hearing in Melbourne that ordered him to face a jury on "multiple" charges, although half of the allegations against him, including some of the most serious, were thrown out.

"Not guilty", the top aide to Pope Francis said loudly and without hesitation when asked his plea, a stance he has taken since first being charged last year.

Melbourne magistrate Belinda Wallington said she was "satisfied" there was enough evidence for a conviction on "multiple" charges with a directions hearing due on Wednesday to discuss a trial date.

Pell, who entered the court surrounded by a large police presence, was released on bail on the condition he does not leave Australia. He has already handed in his passport, the court heard.

The former Sydney and Melbourne archbishop has been on leave from the Vatican, returning to Australia to fight the allegations which relate to incidents that allegedly occurred long ago.

"Cardinal George Pell has at all times fully cooperated with Victoria Police and always and steadfastly maintained his innocence," said a statement issued through the Archdiocese of Sydney and attributed to Pell.

"He has voluntarily returned to Australia to meet these accusations. He will defend the remaining charges."

The exact details and nature of the claims remain confidential, other than they involve "multiple complainants".

But some of the alleged offending was at a swimming pool in Ballarat in Victoria in the 1970s and at Melbourne's St Patrick's Cathedral in the 1990s, the court heard.

In a win for him, some of the most serious allegations were dismissed due to inconsistencies in the evidence, including claims of offending at a cinema in Ballarat during a screening of "Close Encounters of the Third Kind".

No one above the law

Lisa Flynn, a lawyer who has represented hundreds of abuse survivors in civil litigation claims in Australia, said the ruling proved no one was above the law.

"The charging of Pell for these alleged crimes reinforces that people should be and are treated equally in the eyes of the law," she said.

"This is a promising step forward for victims of sexual assault."

Pell's case has coincided with an Australian national inquiry into child sexual abuse, ordered in 2012 after a decade of pressure to investigate widespread allegations of institutional paedophilia.

Pell appeared before it three times, once in person and twice via video-link from Rome over the Church's handling of complaints against paedophile priests.

Australia's Catholic leaders have previously spoken out in support of him, describing Pell as a "thoroughly decent man".

The Catholic Archdiocese of Melbourne on Tuesday said Melbourne Archbishop Denis Hart would be making no comment.

But it added that "Archbishop Hart expressed his confidence in the judicial system in Australia and said that justice must now take its course".

The Catholic Church globally has been plagued by allegations of sex abuse among priests, with the scandals haunting the papacy of Pope Francis, who in February announced the Vatican was reviving its anti-paedophile panel.

It followed a trip to Chile in January that was seen as a resounding failure after he defended a bishop accused of covering up the crimes of a paedophile priest.

Pell was one of the pope's most trusted aides, handpicked by him in 2014 to make the church's finances more transparent.

It cemented a meteoric rise by the Australian, who was Archbishop of Melbourne and then Sydney before being named to the Vatican's powerful College of Cardinals at the behest of Pope John Paul II in 2003.