World   Oceania  03 Jul 2020  Thanks to conspiracy theories, Australians are refusing to test for COVID-19
World, Oceania

Thanks to conspiracy theories, Australians are refusing to test for COVID-19 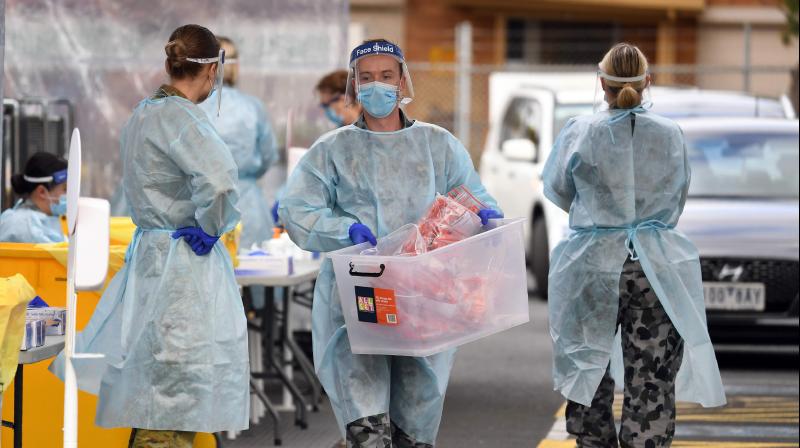 A member of the Australian Defence Force carries a batch of swab samples taken from members of the public at a drive-through COVID-19 coronavirus testing station in the Melbourne suburb of Fawkner on July 2, 2020. (AFP)

Melbourne: Coronavirus conspiracy theories are hampering frantic efforts to contain a steep spike in cases around the city of Melbourne, where more than 10,000 people have refused testing, Australian health authorities warned Friday.

Health officials in the southern state of Victoria pled with the public to get themselves tested for COVID-19 and to ignore disinformation propagating online.

Having dodged the worst ravages of the pandemic and eased most lockdown restrictions, Australia is now struggling to contain several clusters around its second-biggest city that are delivering dozens of new cases each day.

"Disappointingly however we have had more than 10,000 people who have refused to be tested," health minister Jenny Mikakos said.

Officials were still analysing the reasons given for refusing testing, but Mikakos said: "The report that I have received is that some people believe that coronavirus is a conspiracy, or that it won't impact on them."

Describing the trend as "concerning" she said, "What I want to stress here is that coronavirus is a very contagious virus. It can go through your family very quickly."

She said a "testing blitz" was vital to trace, track and ultimately check the spread of the disease.

Throughout the pandemic, falsehoods have spread quickly online across the world.

One prominent Australian conspiracy theorist, with 250,000 followers on Instagram alone, has made false claims about "contaminated test kits", while denying the pandemic exists.

Similarly, AFP fact-checkers have debunked several spurious claims that testing is an excuse to implant Bill Gates-funded "microchips" or that tests do not work.

'Back to square one'

Amid the deluge of disinformation, residents expressed deep unease about the impact of reinstated lockdowns.

More than 300,000 people have been forced back into lockdown around Melbourne until July 29.

On the eve of the restrictions coming into force this week, Carly Moore, mayor of the Hume neighbourhood, said her community was devastated.

"I wanted to cry, if I'm completely honest," she said, clearly emotional.

Australia has recorded more than 8,000 coronavirus cases and just over 100 deaths in a population of 25 million.

The last two weeks have seen the emergence of about 700 of those cases, after a long lull.