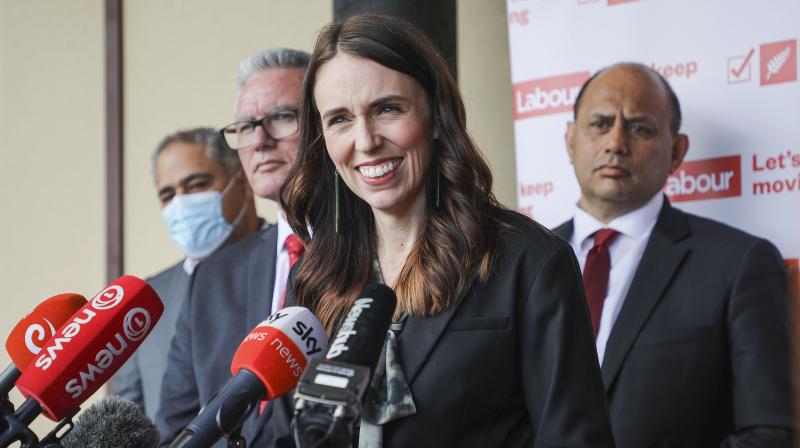 New Zealand Prime Minister Jacinda Ardern, second right, addresses the media on the first day of her election campaign in Rotorua, New Zealand, Monday, Sept 7. 2020. Ardern said that her government will create a new public holiday to celebrate the Maori New Year if it is reelected next month. (AP)

Wellington: New Zealand Prime Minister Jacinda Ardern said on Monday that her government will create a new public holiday to celebrate the Maori New Year if it is reelected next month.

Ardern, who leads the liberal Labour Party, began her election campaign by saying she'd heard people throughout the country calling for the holiday.

"Its time has come," she said.

New Zealand currently marks 10 national public holidays plus one more for each region and hasn't added any new holidays for nearly 50 years.

Many people have argued that marking the day would help recognise the nation's indigenous people. The date of the mid-winter holiday would vary each year to coincide with the reappearance of Matariki, a star cluster associated with the start of the lunar year in Maori tradition.

New Zealand currently marks Waitangi Day, which commemorates the signing of an 1840 treaty between Maori and the British that's considered the nation's founding document. Some protest the day, viewing it as a symbol of Maori being unfairly dispossessed of their land and rights by colonizers.

Ardern made the announcement after the parliament was dissolved on Sunday and politicians hit the campaign trail ahead of the general election on October 17, a date that was delayed by four weeks due to a coronavirus outbreak in Auckland last month.

Some business groups say they are opposed to the idea.

Conservative lawmaker David Seymour, from the opposition ACT party, said thousands of people had lost their jobs due to the virus and struggling businesses couldn't afford another holiday.

"If Jacinda Ardern considers this the sort of policy we need during a recession, she's not fit to govern," Seymour said in a statement.

Labour Party Deputy Leader Kelvin Davis, who is Maori, said celebrating the day would allow Maori to share their unique culture and history and would be a step forward in uniting the nation.

Ardern said the holiday would not begin until 2022 to give businesses time to recover from the virus.