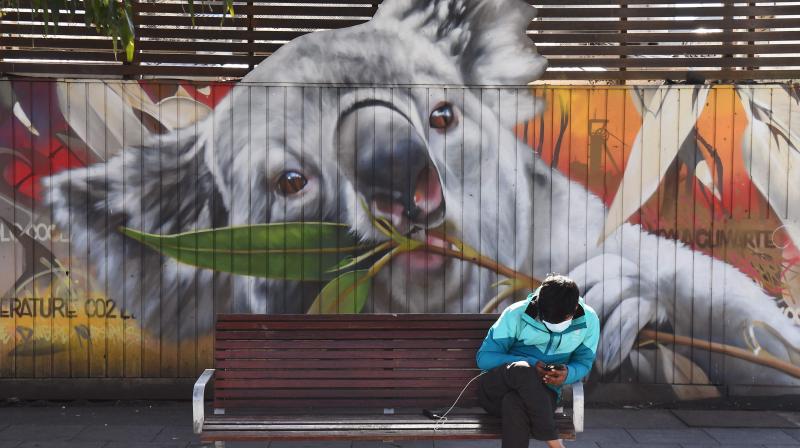 A man looks at his phone as he sits in front of a mural of a koala in Melbourne on September 10, 2020. - A dispute over protection measures for Australia's endangered koalas threatened September 10 to topple the government of the country's biggest state. (AFP)

Sydney: A dispute over protection measures for Australia's endangered koalas threatened Thursday to topple the government of the country's biggest state.

Angered by a new koala conservation law it says comes at the expense of farmers in New South Wales, the rural-based Nationals party withdrew its support for state Premier Gladys Berejiklian's governing Liberals.

The move left Berejiklian with a minority government, lacking the numbers in parliament to pass legislation as the state battles to recover from the coronavirus crisis.

Berejiklian's Liberals have governed in a delicate coalition with the Nationals in NSW, a state that runs from populous coastal areas that include Sydney to a vast rural outback.

In a statement, the Nationals decried the koala bill passed last December as "a blunt instrument to make city-centric law makers feel good about themselves", claiming it prevents farmers from clearing their own land.

Environmental groups criticised the stance, saying koalas were on track for extinction in NSW by 2050 without urgent intervention.

"Wanting to retain the right to kill koalas is an extraordinary hill for the Nationals to want to die on, but here we are," Nature Conservation Council CEO Chris Gambian said.

Corey Bradshaw, professor of global ecology at Flinders University, said the legislation that sparked the political fight was "a mere band-aid in the fight to stem further deforestation".

NSW has some of the weakest anti-land clearing laws in Australia, Bradshaw said, with poor enforcement and insufficient penalties exacerbating the problem.

"With increasing mega bushfires, the legacy and persistence of broad-scale deforestation, and weak laws, koalas in New South Wales are effectively doomed," he said.

"Koalas live in and eat trees -- you don't need a university degree to predict what will happen when you continue to destroy their already highly degraded habitats."

Berejiklian, who has steered the state through the devastating bushfires and coronavirus pandemic, is yet to comment publicly on the row.