The minister said the country does not have a diplomatic mission in Ukraine, and the assistance that can be provided to citizens is limited 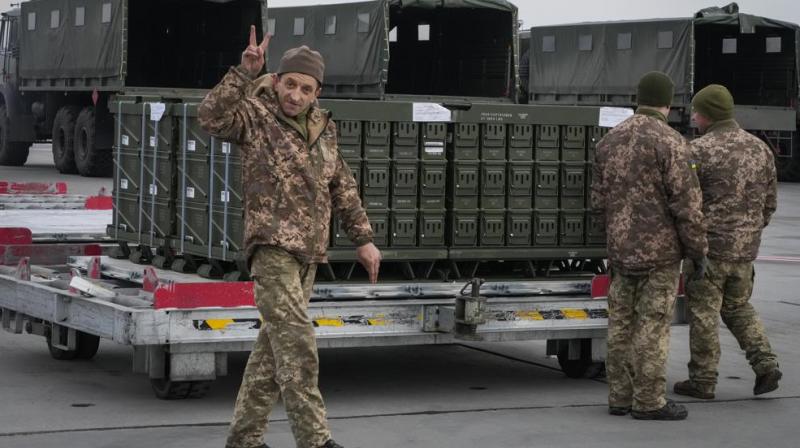 An Ukrainian serviceman flashes the V for victory sign during unpacking shipment of military aid delivered as part of the USA's security assistance to Ukraine, at the Boryspil airport, outside Kyiv, Ukraine, Friday, Feb. 11, 2022. (AP/Efrem Lukatsky)

Wellington: New Zealand Foreign Minister Nanaia Mahuta called on New Zealanders in Ukraine to leave the country as soon as possible due to the "heightened tensions."

"In response to heightened tensions between Russia and Ukraine, the New Zealand Government is advising New Zealanders in the Ukraine to leave immediately while there are commercial flights able to get them home," Mahuta said in a statement, as quoted by the government website.

The minister added that the country does not have a diplomatic mission in Ukraine, and the assistance that can be provided to citizens is limited. The security situation in Ukraine can change quickly, so New Zealanders should not rely on evacuation organized by their country, according to Mahuta.

Earlier this week, Australia, Japan, the Netherlands, and South Korea also advised their citizens to leave Ukraine shortly after US State Secretary Antony Blinken claimed that Russia could attack its neighboring country even before the end of the Olympics, which are being held in China at the moment.

Russia has repeatedly denied West's allegations about its preparations to invade Ukraine, saying it has no plans to attack any country but reserves the right to move troops on its sovereign territory as it sees fit. Russia has warned that NATO's plans to further expand eastward represent a direct threat to its national security.