Residents in the state can now have outdoor gatherings of up to 10 people, and cafes will be able to seat up to 50 people outside 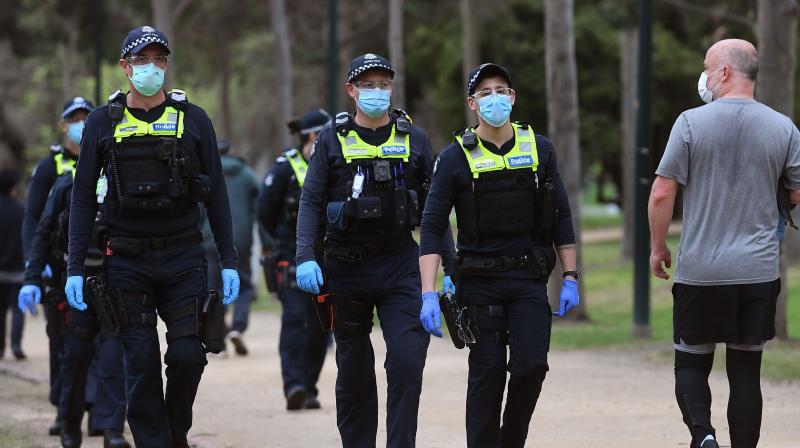 Police patrol a running track as people exercise ahead of an anti-lockdown rally in Melbourne, as the city continues to enforce strict lockdown measure to battle a second wave of COVID-19 coronavirus infections. (AFP)

Sydney: Australia’s Victoria state said the daily rise in coronavirus infections eased further on Thursday, as the state began relaxing most restrictions outside its largest city of Melbourne after a steady drop in cases in recent days.

Residents in regional areas of the state can now have outdoor gatherings of up to 10 people, and cafes will be able to seat up to 50 people outside.

Victoria, Australia’s second-most populous state, reported 28 new cases on Thursday, the lowest daily rise since June 24 and down from daily highs above 700 in early August.

The southeastern state, at the centre of the coronavirus outbreak in the country, reported eight deaths from the virus in the last 24 hours, the same as reported a day earlier.

Average daily cases over the last two weeks in Melbourne, which is on an extended hard lockdown until Sept. 28, continued their downward trend, falling below 45 on Thursday. The average dropped below 50 on Wednesday, the level the state has set to start easing curbs for the city.