The embassy also noted that the Chinese government is determined to safeguard the 'One Country, Two Systems'. 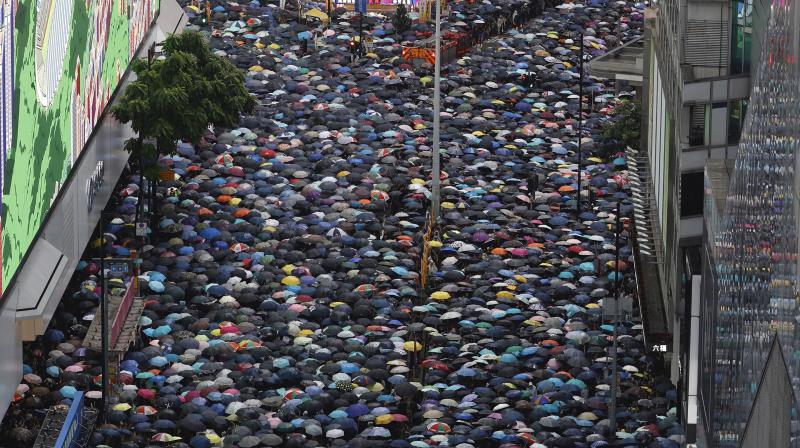 'The Central Government of China has the determination, confidence and capability to safeguard the 'One Country, Two Systems' and maintain stability and prosperity in Hong Kong', the statement said. (Photo: AP)

Ottawa: China on Sunday warned Canada against interfering in Hong Kong issue, saying the matter is "purely internal" and does not require any interference by any other country.

This comes hours after Canadian Foreign Minister Chrystia Freeland and EU foreign policy chief Federica Mogherini said in a joint statement that urgent steps are needed to de-escalate the situation in Hong Kong.

"We want to reiterate that Hong Kong affairs are purely China's internal affairs, which brook no interference by any other country, organisation or individual. The 'One Country, Two Systems' is enshrined in the Constitution of the People's Republic of China and the Basic Law of the Hong Kong SAR, not international law," said Chinese Embassy in Canada in a statement.

The embassy also noted that the Chinese government is determined to safeguard the 'One Country, Two Systems'.

"The Central Government of China has the determination, confidence and capability to safeguard the 'One Country, Two Systems' and maintain stability and prosperity in Hong Kong", the statement said.

Freeland and Mogherini had called for dialogue involving all stakeholders to resolve the matter, reported Sputnik.

"Fundamental freedoms, including the right of peaceful assembly ... must continue to be upheld," said the duo in the statement.

"It is crucial that restraint is exercised, violence rejected and urgent steps are taken to de-escalate the situation," the pair wrote.

"Engagement in a process of broad-based and inclusive dialogue, involving all key stakeholders, is essential," the statement said, noting that both Canada and the EU support Hong Kong's "high degree of autonomy" within China, as well as its residents' right to peaceful assembly.

Hong Kong has been witnessing protests since early June. The demonstrations were triggered by the now-suspended extradition bill which would allow suspects to be extradited to China to face trial.

Even though the bill has been suspended, the protests have continued and taken on a more pro-democracy outlook. Protesters have also demanded an inquiry into police authority and alleged brutality.

China has decried the protests, with one Chinese official alleging that the demonstrations have 'begun to show signs of terrorism'.