Coronavirus vaccine should be mandatory in Australia: PM

Anticipating a backlash from vocal anti-vaccine activists, Morrison said the stakes were too high to allow the disease to continue unchecked 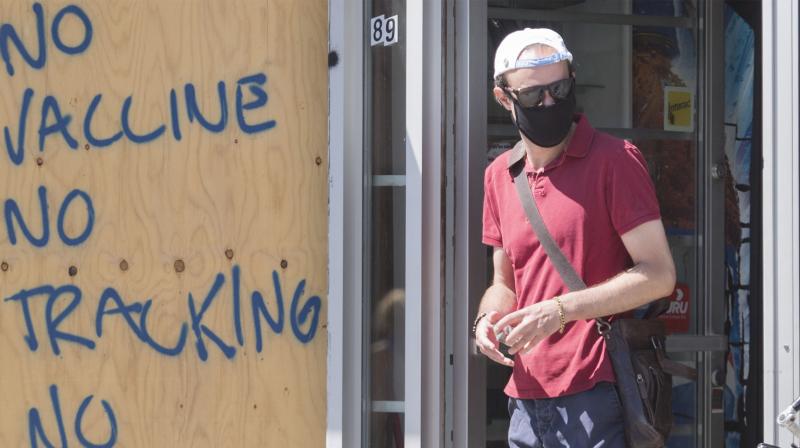 A man wears a face mask as he passes by graffiti reading 'No vaccine, No tracking, No COVID'. (AP)

After reaching a deal for the country to manufacture a "promising" vaccine being developed by AstraZeneca and Oxford University, Morrison said getting the jab should be "as mandatory as you can possibly make it".

"There are always exemptions for any vaccine on medical grounds, but that should be the only basis," he told radio station 3AW in Melbourne.

Anticipating a backlash from vocal anti-vaccine activists, Morrison said the stakes were too high to allow the disease to continue unchecked.

"We're talking about a pandemic that has destroyed the global economy and taken the lives of hundreds of thousands all around the world," he said, while stressing the government has not yet made a decision.

The Australian government estimates that up to 95 percent of the population would need to be immune to the virus for it to be irradicated.

"We need the most extensive and comprehensive response to this to get Australia back to normal," Morrison said, after announcing the vaccine would be free to all Australians.

The country already has "no jab, no play" rules that mean kids have to receive vaccines for diseases including polio and tetanus to enrol in kindergarten or school.

But debate still rages about whether those rules impinge on personal freedoms, and hardline anti-vaxers flood online forums with conspiracy theories and misinformation about the risks.

The coronavirus pandemic -- which has killed more than 400 Australians -- has coincided with a sharp uptick in online misinformation, speculation and opposition to vaccines -- something experts have dubbed an "infodemic".

No effective vaccine for coronavirus has yet been released, although Morrison said he was optimistic one could be developed by early next year, with manufacturing taking just a few months more.

"As soon as we get the recipe we'll be making it," he said.