The temporary measure comes after photos of beachgoers packed on the famous sands were widely shared online, drawing ire from the media 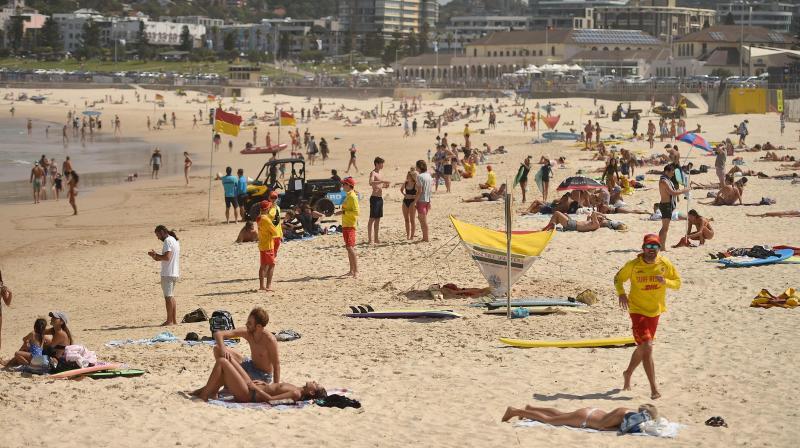 People sunbathe on Bondi Beach ahead of its closure in Sydney on Saturday. AFP Photo

Sydney: Authorities closed Sydney's Bondi Beach Saturday after huge crowds flocked to the popular sunbathing spot despite a government ban on large gatherings due to the coronavirus pandemic.

The temporary measure comes after photos of mostly young beachgoers packed on the famous sands were widely shared online, drawing howls of protest in the media and from officials.

"What we saw this morning here on Bondi Beach was the most irresponsible behaviour of individuals that we've seen so far," New South Wales state Police Minister David Elliott said.

"This is not something we are doing because we are the 'fun police'," he told a beachside news conference.

The ban could be extended to other beaches if social distancing rules are not followed, he warned.

Non-essential outdoor gatherings of more than 500 people have been barred as officials seek to stem the spread of the virus. Australia has nearly 1,000 confirmed cases of COVID-19.

"This is a disease that young people can get -- they can go into hospital, they can die from it," Kristina Keneally, a NSW senator who lives in Sydney, warned.

Australia has taken a series of drastic steps to contain the spread of the contagion, including closing its borders to foreigners and non-residents.

But Prime Minister Scott Morrison has so far stopped short of ordering people to stay home or the shutdown of non-essential businesses, as introduced in some parts of the world.