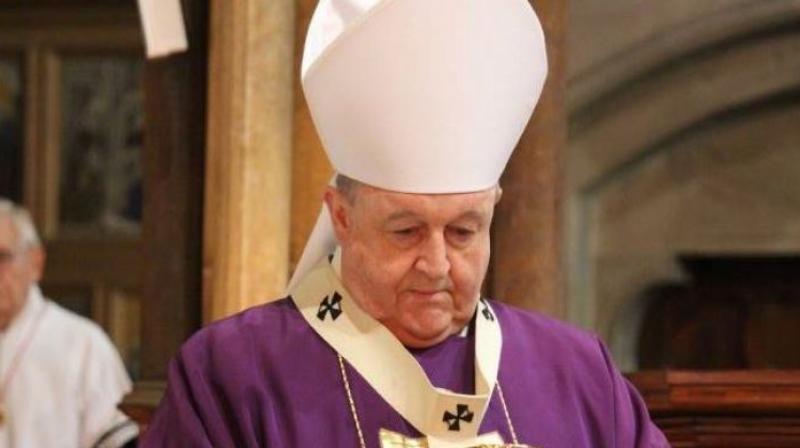 Wilson, who faces up to two years in jail, said Wednesday he was stepping aside from his church duties while he weighs up the magistrate's verdict. (Photo: Facebook)

Sydney:  An Australian archbishop who became one of the world's highest-ranked church officials found guilty of covering up child sex abuse announced Wednesday he will stand down from his official duties.

Adelaide Archbishop Philip Wilson, 67, was accused of concealing abuse in the 1970s by notorious paedophile priest Jim Fletcher in New South Wales state by failing to report the allegations.

He denied the charges but was found guilty by a Newcastle court this week of concealing a serious indictable offence of another person.

Wilson, who faces up to two years in jail, said Wednesday he was stepping aside from his church duties while he weighs up the magistrate's verdict.

"I am still considering those reasons together with my legal advisors," he said in a statement.

"While I do so, it is appropriate that, in the light of some of his Honour's findings, I stand aside from my duties as Archbishop."

Wilson's legal team had made four attempts to have the case thrown out, arguing his diagnosis of Alzheimer's should preclude him from trial -- even though it did not prevent him retaining his position in the church.

Sentencing will be at a later date and the archbishop on Wednesday left the door ajar for a formal resignation as the case unfolds.

"If at any point in time it becomes necessary or appropriate for me to take more formal steps, including by resigning as Archbishop, then I will do so," he said.

There was no dispute that paedophile Fletcher, who is now dead, sexually abused altar boy Peter Creigh, with the hearing focused on whether Wilson, then a junior priest, was told about it.

The magistrate did not accept Wilson's defence that he did not remember the conversation and found Creigh, who broke down in tears after the verdict, "had no motive or interest to deceive or make up the conversation".

Child abuse survivor advocates are hopeful the case will have wide-ranging implications for other jurisdictions to begin investigating those who may have been aware of child abuse but failed to report it.