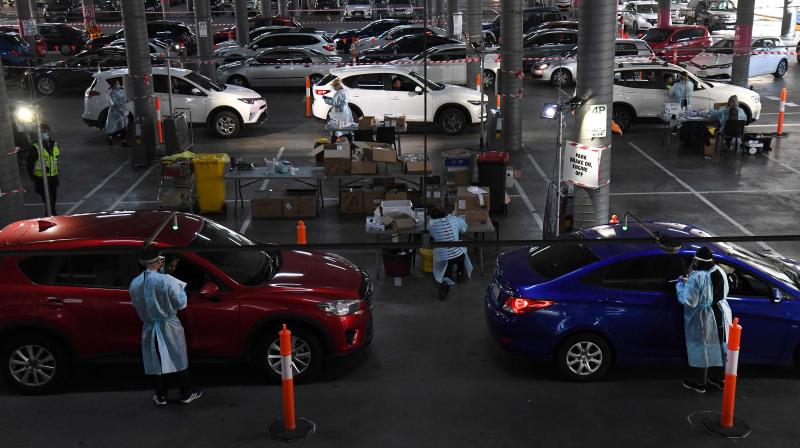 Melbourne: Health workers fanned out across suburbs of Melbourne Friday in a testing blitz aimed at choking off a surge in coronavirus cases in Australia's second-biggest city.

Officials reported another 30 new COVID-19 infections in the city overnight in a continuing outbreak that has raised fears of a second wave in Australia, which looked like it had successfully contained the disease.

It was the 10th straight day of double-digit rises in new cases in Melbourne and surrounding Victoria state, while most other Australian regions have seen no or low single-digit new infections for weeks.

Some 200 soldiers were due to deploy to Melbourne over the weekend to help with the testing offensive in 10 suburb "hot spots", where officials are going door-to-door to track the virus.

The army initially announced plans to send up to 1,000 troops to Melbourne for the testing drive and to help guard locations where returning international travellers are held in mandatory two-week quarantine.

But the state government on Thursday reduced its request for military backup to around 200 troops for the testing effort, officials said.

Victoria Premier Daniel Andrews has set a goal of testing 100,000 people in 10 days in the targeted suburbs.

Some 20,000 tests were carried out in the first 24 hours of the effort, state Deputy Chief Health Officer Annaliese van Diemen said on Friday.

The Melbourne outbreak has rattled officials across Australia, with several states warning Victorians to stay away.

In neighbouring New South Wales, officials said they would bar Victorians from attending professional sporting events when they begin allowing fans next week -- a particularly stinging move in the sports-mad country.

Australia has recorded roughly 7,500 coronavirus cases and 104 deaths in a population of 25 million, with several regions believed to be effectively virus-free.