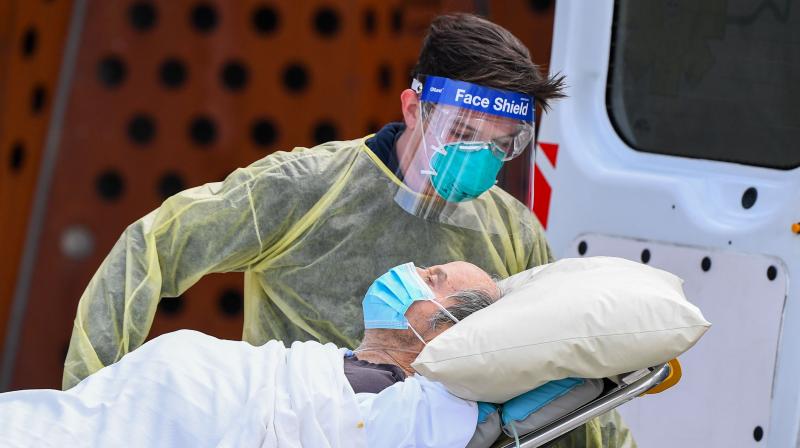 Ambulance officers transfer a resident from the Epping Gardens aged care facility in the Melbourne suburb of Epping as the city battles fresh outbreaks of the COVID-19 coronavirus. (AFP)

Melbourne: Australia on Thursday reported a record number of new coronavirus infections and its deadliest day of the epidemic so far following a spike in cases at elderly-care homes.

Days after authorities expressed hope that a Melbourne lockdown now in its third week was bringing persistent outbreaks under control, the surge is a potent warning that initial success in managing coronavirus can quickly unravel.

Thirteen deaths and 723 positive test results were recorded in Victoria State alone, well beyond the previous nationwide high of 549 infections set on Monday.

Premier Daniel Andrews indicated the leap was, in part, linked to a surge in cases at aged-care homes.

Most of those who died were aged in their 70s-90s.

At one of the worst-hit facilities, Epping Gardens, an ambulance was seen Wednesday taking away the body of one of the deceased residents.

Health workers rolled other masked residents on stretchers to waiting ambulances for transfer to hospital.

"They are incredibly distressing and they are the product of a very severe crisis that occurred in a number of these centres," Morrison said.

The rest of the country remained on high alert, as three new cases were reported in Queensland and several schools in Sydney were shuttered overnight amid growing fears that the country's largest city may also be sliding towards an uncontrollable outbreak.

Morrison said although the New South Wales Premier Gladys Berejiklian was right to be "constantly anxious" of the threat, the sources of the infections were being tracked and well-controlled so far.

"That still gives us reason for, I think, encouragement in New South Wales, but not reason for complacency," he said.

Melbourne has had thousands of new infections since mid-June -- an outbreak initially blamed on security bungles at hotels where returning international travellers were under mandatory quarantine.

The government has now extended some of Melbourne's lockdown measures to surrounding cities, and deployed disaster-relief teams to elderly-care centres.

Those teams -- which usually tackle earthquakes and other disasters overseas -- include doctors, nurses, paramedics and logistics experts.

With most other states and territories recording zero or just a handful of new cases for weeks, police around the country continue to crack down on those flouting travel bans from virus hotspots and other public health orders.

In one incident, three women -- two of which have since tested positive for the virus -- now face hefty fines and up to five years in prison after allegedly lying to border authorities about travelling from Victoria to Queensland, police said.

Australia has recorded over 16,000 coronavirus cases and 189 deaths in a population of 25 million.