India’s ties with Beijing have soured over a territorial dispute in the Himalayas and China's military support of Pakistan. 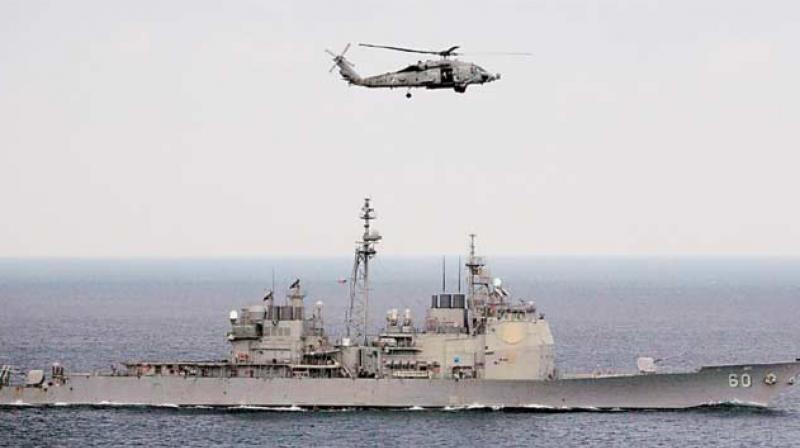 Sydney: India has rejected an Australian request to take part in joint naval exercises with the United States and Japan for fear of antagonising China, which has warned against expanding the drills, navy officials and diplomats said.

Australia formally wrote to the Indian defence ministry in January asking if it could send naval ships to join the July wargames as an observer, in what military experts saw as a step toward eventual full participation.

Four officials from India, Australia and Japan said India blocked the proposal and suggested that Canberra send officers to watch the exercises in the Bay of Bengal from the decks of the three participating countries' warships, instead.

New Delhi is worried that China will step up activities in the Indian Ocean where it is building infrastructure in Sri Lanka, Bangladesh and Pakistan, feeding India's anxiety about being encircled, Indian military sources and diplomats said.

Indian navy officials say there have been at least six submarine deployments by China in the Indian Ocean since 2013 and that Chinese submarines have been docking in Sri Lanka and its long-time ally Pakistan.

"India is being careful about China," said Abhijit Singh, a former Indian navy officer who heads maritime studies at the Observer Research Foundation in New Delhi.

"India is aware they have upped their maritime engagement in this part of the world and they could just become more brazen with their submarine deployments. We don't want that to happen," Singh said.

New Delhi's ties with Beijing have soured in recent years over a territorial dispute in the Himalayas and China's military support of Pakistan.

China has also been concerned that Prime Minister Narendra Modi's avowedly nationalist government has stepped up public engagement of the Dalai Lama, the Tibetan spiritual leader who lives in exile in India and whom it regards as a "splittist".

An Indian defence ministry spokesman confirmed there had been a request from Australia for observer status in the July exercises, but he said he was not in a position to provide any details of the Indian response.

Both the United States and Japan supported the idea of involving Australia, seeing it as a natural partner in the effort to balance China's growing might, the four officials said.

The Malabar exercises started out as India-US drills in 1992 but have included Japan every year from 2014.

Dozens of warships, submarines and aircraft take part in the wargames, which are aimed at getting the three powerful navies used to working together. US military officials say this will help in future operations, including joint patrols across the Indian Ocean and the Pacific.

The exercises are now held in waters close to the East and South China Sea as well as the Indian Ocean.

China, which claims most of the South China Sea, has protested the expansion. Neighbours Brunei, Malaysia, the Philippines, Taiwan and Vietnam also have claims on the strategic waterway, through which about $5 trillion in ship-borne trade passes every year.

A spokesman for Australia's Minister of Defence Marise Payne refused to comment on the Malabar exercises. But one Australian official, speaking on condition of anonymity because of the sensitivity of the matter, said it was increasingly unlikely Canberra would join the drills although it was keen to do so.

Australia has also traditionally been wary of upsetting China, its largest trading partner.

It takes no sides in the disputes in the South China Sea and has declined to join naval exercises there, although it does support US-led freedom of navigation activities in the region.

India, Japan, the United States and Australia already have bilateral security, dialogue and exercise arrangements with each other, including in some three-country configurations, he said.

"It should be normal and natural for countries with common interests, high levels of trusts and overlapping capabilities to work together on security issues, without another country imposing a veto on who trains with whom," he said.