The situation worsened when China started constructing a road near Sikkim Sector. 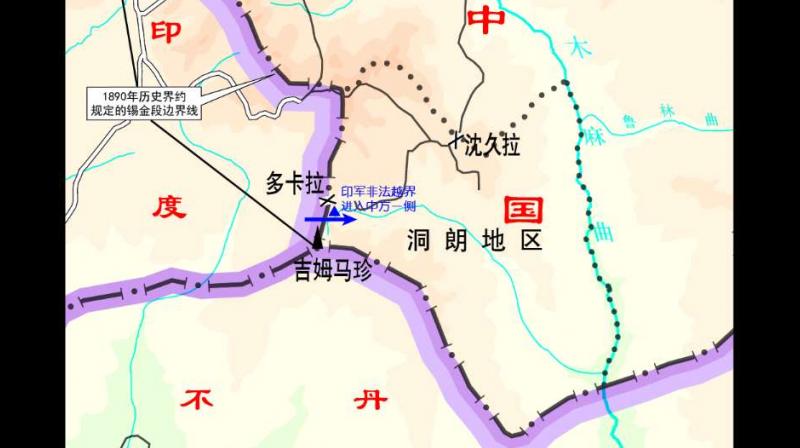 China had mentioned that Donglang is being considered in their territory since “ancient times”. (Photo: China's Foreign Ministry)

Beijing: Amid standoff in Sikkim, China on Tuesday released a map to support its claim that Indian troops entered their territory; only to reveal that the territory quoted is actually under contention.

According to a Hindustan Times report, the picture released by Chinese Foreign Ministry Spokesperson Ku Lang showing India troopers’ ‘incursion’ in China, is basically a territory claimed by both India and Bhutan. The map which China has posted on their foreign ministry website is also far different from the Indian perception of Line of Actual Control (LoAC) between India, China and Bhutan.

Of the ‘trespassed’ area quoted by China, India has claims on land till Batang La, whereas China asserted that their territory is till Mount Gipmochi. The situation becomes more intricate with Bhutan’s claims. Historically, Bhutan and China have a dispute over the area, Donglang or Doklam. However, China had mentioned that Donglang is being considered in their territory since “ancient times”.

The situation worsened when China started constructing a road near Sikkim Sector. India reacted by saying that any such move to “unilaterally determine tri-junction points” violates a 2012 India-China agreement. It further said that the boundary in the region should be finalised after consulting with all concerned countries.

New Delhi, maintaining its stance over border dispute, noted that Indian troops in co-ordination with Bhutan had asked Chinese government to “desist from changing the status quo” by building a road in Donglang area.

Reiterating their claims, Chinese state media earlier had said that there is solid legal evidence to prove that Indian troops trespassed in their territory.

“It is stated in Article one of the Convention Between Great Britain and China relating Sikkim and Tibet (1890) that ‘the boundary of Sikkim and Tibet shall be the crest of the mountain range separating the waters flowing into the Sikkim Teesta and its affluents from the waters flowing into the Tibetan Mochu and northwards into other rivers of Tibet”, said Chinese state media quoting a report.

The HT report further added that the Chinese state media claimed that the line commences at Mount Gipmochi on the Bhutan frontier, and follows the above-mentioned water-parting to the point where it meets Nepal territory.

China had asked Indian soldiers to ‘leave their territory’ for dialogue to ensue. It had also asked India to learn from history referring to 1962 Sino-India war over Arunachal Pradesh.

However, this is not the first time China has claimed India’s portion to be their territory as, in 2013, China carried out an incursion on Indo-China border near Arunachal Pradesh.