After implementing the decades-old one child policy, China is facing a demographic crisis with a rapidly ageing population 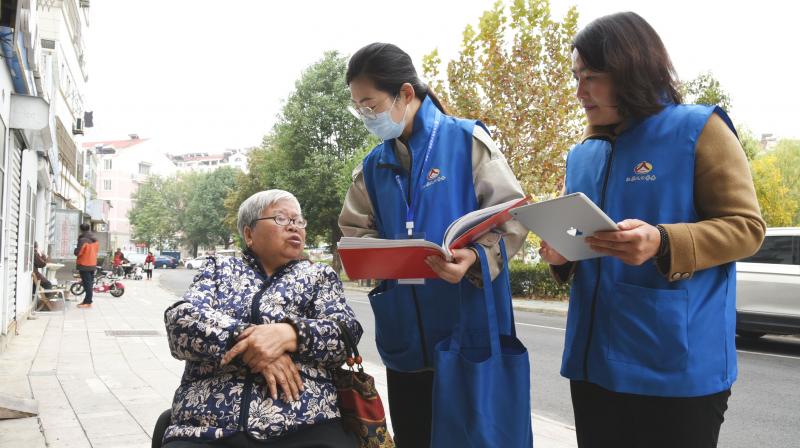 Census workers collect information from a woman in Lianyungang, in China's eastern Jiangsu province on November 1, 2020, as millions of census-takers began knocking on doors for a once-a-decade head count of the world's largest population that for the first time will use mobile apps to help crunch the massive numbers. (AFP)

Beijing: China on Sunday started the world's biggest exercise of population count, conducted once in a decade, to document demographic changes in the most populous country.

About seven million census takers began door-to-door survey for the seventh census in the country to account for China's population stated to be 1.37 billion in the last census exercise ten years ago.

Carrying out the census is critical to understand the population size, structure and distribution, Ning Jizhe, deputy head of the National Development and Reform Commission, said during a video conference to promote the national census.

China has been conducting a national population census every 10 years since the 1990s. The exercise was expected to provide the size of its ageing population.

In March last year, Chinese Premier Li Keqiang told the media that China's population aged above 60 years increased to 420 million and that of children over six years to 100 million putting heavy pressure on nursing services and day care centres.

After implementing the decades-old one child policy, China is facing a demographic crisis with a rapidly ageing population. China has permitted people to have second child since 2016.

China currently has 250 million people above 60 years and 170 million above 65 years, Li said during his annual press conference last March.