Francis praised Bangladesh for giving refuge to the Rohingya who have flooded in since a military crackdown in Rakhine state in August. 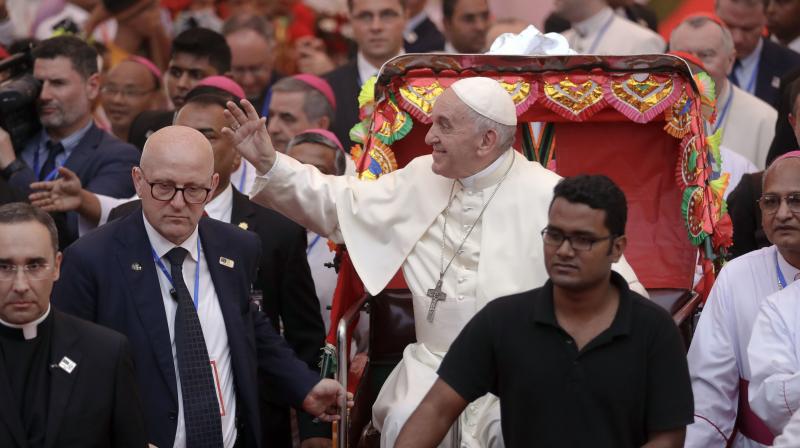 Francis arrived in Dhaka on Thursday from Myanmar, where he walked a diplomatic tightrope, publicly avoiding allegations that the army is waging an ethnic cleansing campaign against the Rohingya. (Photo: AP)

Dhaka: Pope Francis led a giant open-air mass in Dhaka on Friday ahead of finally coming face to face with Rohingya refugees whose desperate plight has dominated his landmark tour of Myanmar and Bangladesh.

The meeting comes a day after Francis urged the world to take "decisive measures" to resolve the crisis that has forced more than 620,000 Rohingya Muslims to flee ethnic unrest in Myanmar for overstretched camps in Bangladesh.

Amid tight security, Francis, the first pope to visit Muslim-majority Bangladesh in 31 years, arrived in a locally-made pope-mobile - a pickup truck covered in glass - at Suhrawardy Udyan park where nearly 100,000 people waited to celebrate the mass.

Buses of faithful came from all over the country. Many queued for hours to get into the park guarded by thousands of security forces.

Suborna Costa, 34, hoped the prayers of the 80-year-old pontiff will help end her family woes.

Costa's husband is ill, her brother went missing in Turkey after he illegally tried to enter Italy and one of her sisters has been unable to speak since childhood.

"For years we don't have any good news in my family. My parents have been in shock since we lost contact with our brother," she said.

"I have been eagerly waiting for this day since his visit was announced several months ago. He is a saintly man and above any sin," said Costa.

Holding a granddaughter, 60-year-old widow Pronita Mra stood in the queue for three hours after arriving from a remote northeastern village near the Indian border.

"I feel like I am blessed to join the Pope's prayers. I'll pray for my late husband and parents so that they go to heaven. I hope the Pope will pray for peace and harmony among all communities in Bangladesh," she said.

The worries of the Rohingya masses who have packed camps on the Myanmar border have dominated the papal tour however.

Francis arrived in Dhaka on Thursday from Myanmar, where he walked a diplomatic tightrope, publicly avoiding allegations that the army is waging an ethnic cleansing campaign against the Rohingya.

He has not used the word Rohingya in public, preferring to refer to them as "the refugees from Rakhine state" - their home in Myanmar where they have been persecuted for decades and refused citizenship.

Francis praised Bangladesh for giving refuge to the Rohingya who have flooded in since a military crackdown in Rakhine state in August.

"This has been done at no little sacrifice. It has also been done before the eyes of the whole world," he said, calling on other countries to offer "immediate material assistance to Bangladesh in its effort to respond effectively to urgent human needs".

Francis will speak with 16 Rohingya refugees, including two children, at a meeting with leaders of other faiths.

Farid Uddin Masoud, a top Muslim cleric who will attend, said he hoped the pope would speak out for the Rohingya.

"He is respected across the globe, not by Christians alone, for being a champion of the poor and oppressed people... So we will strongly expect him to speak for the oppressed Rohingya," he said.

Although the influx has slowed, hundreds of Rohingya refugees are still crossing the border into Bangladesh from Myanmar every day, according to the United Nations.

Many have brought stories of horrific abuses at the hands of the Myanmar military and local Buddhist mobs, including rape, arson and murder.

"When I meet him, I would like to tell him about our plight, about how Myanmar's military tortured us, killed us, raped our women, about the kind of persecution we have been facing," 35-year-old refugee Abul Fayaz told AFP in Cox's Bazar where the camps are located.

"We want him to help us get Rohingya citizenship, ensure our safety, help us move freely to wherever we want... and most importantly make a way so we can say our prayers with freedom like they (Buddhists) do."

Francis is spending three days in the country of 160 million, where a rise in Islamist extremism has seen Catholics attacked.

Christians make up less than 0.5 percent of Bangladesh's population and community leaders say some have left as it becomes more difficult to practise faith openly.

Since 2015 at least three Christians, including two converts from Islam, have been hacked to death in attacks blamed on Islamist militants.