The Islamabad High Court on Tuesday formed an independent five-member commission to probe the alleged abduction of two hindu sisters. 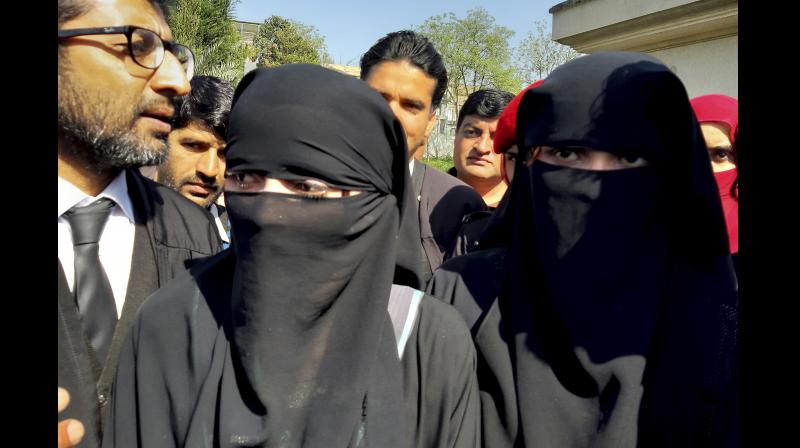 Justice Minallah said the matter requires transparent inquiry and it is the government's job to conduct probes not the judiciary's. (Photo:AP)

Islamabad: The Islamabad High Court on Tuesday formed an independent five-member commission to probe the alleged abduction, forced conversion and marriage of two teenage Hindu girls in Sindh province that led to massive protests by the minority community in the country.

A high court bench led by Chief Justice of IHC Athar Minallah heard the petition filed by the two sisters -- Reena, Raveena -- and their alleged spouses, Safdar Ali and Barkat Ali, to seek protection. In their plea, the girls claimed that they belong to a Hindu family of Ghotki, Sindh but converted willfully as they were impressed by Islamic teaching.

The counsel for the girls' parents, however, asserted that the case pertained to forced conversion. Their father on Monday also filed a petition in the IHC for a medical board to determine the exact ages of the two sisters as well as to test the girls for Stockholm Syndrome, a state of mind when a victim develops trust or affection for kidnappers.

Justice Minallah said the matter requires transparent inquiry and it is the government's job to conduct probes not the judiciary's. The chief justice said the court had to ensure that there was no forced conversion. The bench formed a five-member commission to probe the matter.

The federal government has been tasked to organise meeting of the commission. The incident came to light when a video surfaced online showing the teenagers' father and brother claiming the girls were abducted and forcefully converted.

It was followed by another video snippet in which the two girls claimed that they had converted to Islam. Amid the uproar, Prime Minister Imran Khan directed Sindh and Punjab to investigate the matter and recover the girls if the forceful conversion allegation was correct.

Chief Justice Minallah also ordered that a medical board be constituted to determine the age of the girls. The court ordered the medical board to submit its report at the next hearing on April 11. Earlier, a medical report by Pakistan Institute of Medical Sciences stated that the girls were not minors at the time of their marriages.

The report was dismissed by the family of the girls as well as opposition lawmaker from Pakistan Muslim League-Nawaz, Darshan Punshi, who belongs to the Hindu community. Both the family and the lawmaker demanded an independent medical board to determine the age.

The girls and their husbands had filed a petition for protection against threats to their lives. Already, the IHC on March 26 ordered state protection for the couples. The petition also stated that the two girls left their home on March 20 and two days later they willingly converted and entered into marriages.

During the hearing, the chief justice noted the increasing number of forced conversion cases from Ghotki. He was irked at the governments' failure to find a solution.

“Why are such incidents repeatedly being reported from one district of the Sindh province?” He said the perception that minorities' rights were not protected has to be changed. When speaking about the rights of minorities, Justice Minallah referenced the recent terror incident in New Zealand's Christchurch that killed 50 Muslims and the Jessica Arden-led government's response.

The judge asked Pakistan Tehreek-e-Insaf lawmaker Ramesh Kumar Vankwani why the matter was not raised in the parliament. To which, Vankwani said he will bring the House's attention to it.

Until the inquiry is completed, the high court has ordered for the girls to remain in state custody. They are currently being housed at the Shaheed Benazir Bhutto Crisis Centre in Islamabad.

The high court summoned reports sought by the premier and adjourned the hearing till April 11. The Hindu community in Pakistan has carried out massive demonstrations calling for strict action to be taken against those responsible for forced conversion and marriages of Hindu girls, while reminding Prime Minister Khan of his promises to the minorities of the country.

Last year, Khan during his election campaign had said his party's agenda was to uplift the various religious groups across Pakistan and said they would take effective measures to prevent forced marriages of Hindu girls.

External Affairs Minister Sushma Swaraj last month sought details from the Indian envoy in Pakistan into the alleged abduction of the two Hindu teenaged girls and their forcible conversion to Islam. Hindus form the biggest minority community in Pakistan. According to official estimates, 75 lakh Hindus live in Pakistan. Majority of Pakistan's Hindu population is settled in Sindh province.

According to media reports, approximately 25 forced marriages take place every month only in Umerkot district in Sindh province.