China friendship road only about their growth, says Pakistan

While China and Pakistan say that the project is mutually beneficial, data shows a different story. 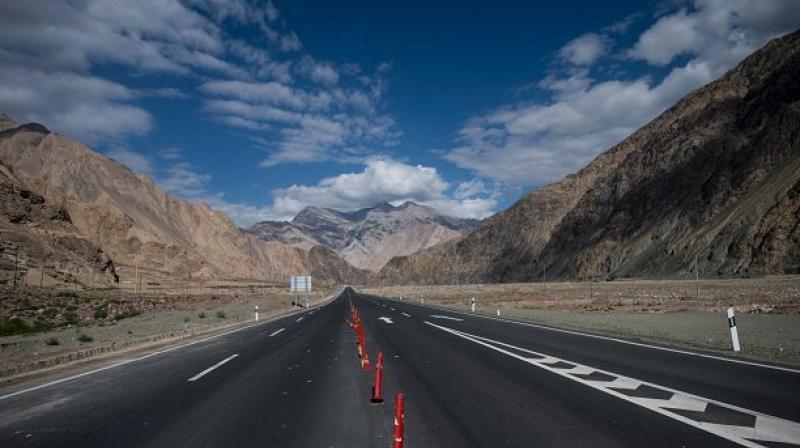 For China, the two-lane thoroughfare symbolises a blossoming partnership, nourished with tens of billions of dollars of infrastructure investment. (Photo: AFP)

Tashkurgan (China): The China-Pakistan Friendship Highway runs over 1,300 kilometres (800 miles) from the far western Chinese city of Kashgar through the world's highest mountain pass and across the border.

For China, the two-lane thoroughfare symbolises a blossoming partnership, nourished with tens of billions of dollars of infrastructure investment.

But for many Pakistani businessmen living and working on the Chinese side of the border, the road is a one way street.

"China says our friendship is as high as the Himalayas and as deep as the sea, but it has no heart," said Pakistani businessman Murad Shah, as he tended his shop in Tashkurgan, 120 kilometres from the mountain pass where trucks line up to cross between China's vast Xinjiang region and Pakistan.

"There is no benefit for Pakistan. It's all about expanding China's growth," Shah said, as he straightened a display of precious stones.

The remote town of around 9,000 is at the geographic heart of Beijing's plans to build a major trade artery - the China-Pakistan Economic Corridor (CPEC) - connecting Kashgar to the Arabian Sea port of Gwadar.

The project is a crown jewel of China's One Belt, One Road (OBOR) initiative, a massive global infrastructure programme to revive the ancient Silk Road and connect Chinese companies to new markets around the world.

In 2013, Beijing and Islamabad signed agreements worth $46 billion to build transport and energy infrastructure along the corridor, and China has upgraded the treacherous mountain road better known as the Karakoram Highway.

While both countries say the project is mutually beneficial, data shows a different story.

Pakistan's exports to China fell by almost eight percent in the second half of 2016, while imports jumped by almost 29 percent.

In May, Pakistan accused China of flooding its market with cut rate steel and threatened to respond with high tariffs.

"There are all of these hopes and dreams about Pakistan exports," said Jonathan Hillman, a fellow at the Center for Strategic and International Studies in Washington.

"But if you're connecting with China, what are you going to be exporting?"

The products were typical of the kinds of small consumer goods brought by Pakistani traders into Xinjiang: medicine, toiletries, semi-precious stones, rugs and handicrafts.

"If you bring anything from China, no problem," said Muhammad, a trader in the ancient Silk Road city of Kashgar, who declined to give his full name.

But he said tariffs on imported Pakistani goods are "not declared. Today it's five percent, tomorrow maybe 20. Sometimes, they just say this is not allowed".

Three years ago, Shah was charged between eight and 15 yuan per kilo to bring lapis lazuli, a blue stone. The duty has since soared to 50 yuan per kilo, he said.

Customs officials told AFP the "elements influencing prices were too many" for them to offer a "definite and detailed list" of costs.

Alessandro Ripa, an expert on Chinese infrastructure projects at Ludwig Maximilian University Munich, said the highway "is not very relevant to overall trade" because "the sea route is just cheaper and faster".

The project is better understood as a tool for China to promote its geopolitical interests and help struggling state-owned companies export excess production, he said.

Over the last year, Beijing has flooded Xinjiang, which has a large Muslim population, with tens of thousands of security personnel and imposed draconian rules to eliminate "extremism".

Businessmen complain they are not allowed to worship at local mosques, while shops can be closed for up to a year for importing merchandise with Arabic script.

In June, on the 300 kilometre trip between Kashgar and Tashkurgan, drivers were stopped at six police checkpoints, while their passengers had to walk through metal detectors and show identification cards. Signs warn that officials can check mobile phones for "illegal" religious content.

Police officers interrupted an interview in Tashkurgan to demand a shopkeeper hand over his smartphone and computer for inspection, an event he said occurs several times a week.

Shah said that when he first arrived in the town, the intrusive security made him nervous: "But now I'm used to it. I almost feel like I'm one of the police."

As he spoke, an alarm sounded. He grabbed a crude spear, body armour and a black helmet off his counter and rushed into the street, where police had assembled over a dozen people for impromptu counter-terrorism drills.

The exercises are held up to four times a day. Stores are closed for several days if they do not participate.

Back in Kashgar, Muhammad hopes that CPEC will make life better, but he believes the oppressive security will remain an obstacle.

He plans to give it another three years. But, he said, he cannot wait forever: "Many people have already gone back."