After much precaution in Myanmar, Pope uses ‘Rohingya’ for refugees in B’desh

Pope Francis is known for championing the rights of refugees and has repeatedly expressed his support for the Rohingya. 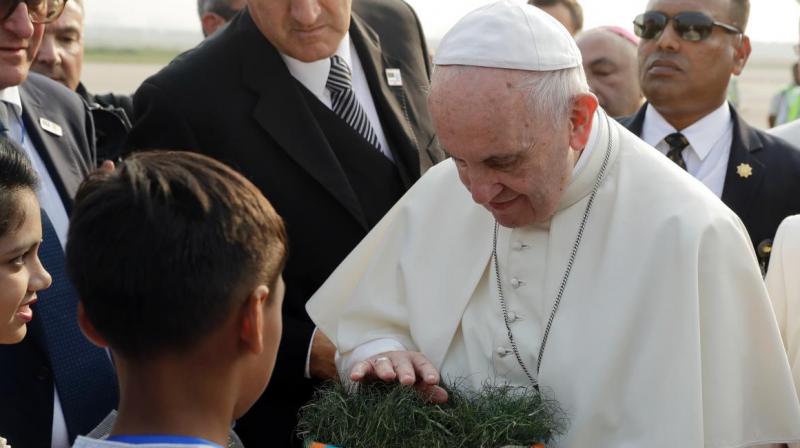 Bangladesh has a tiny Christian population but they turned out in large numbers for Friday's service, many having queued for hours to get into the park. (Photo: AP)

Dhaka: Pope Francis referred to refugees who have fled Myanmar for Bangladesh as "Rohingya" on Friday, using the politically sensitive name for the persecuted minority for the first time on an Asia tour dominated by their plight after meeting some of them in Dhaka.

In a brief but strongly worded speech that followed an emotional encounter with a small group of the refugees who have fled to Bangladesh, he asked for forgiveness for all that the Rohingya have suffered "in the face of the world's indifference".

"Today the presence of God is also called Rohingya," the pope said on the sidelines of a gathering with the leaders of different faiths in Dhaka.

"Your tragedy is very hard, very great, but it has a place in our hearts. In the name of all those who have persecuted you, who have harmed you, in the face of the world's indifference, I ask for your forgiveness."

More than 620,000 Rohingya have flooded into Bangladesh in the last three months, fleeing a violent military crackdown in mainly Buddhist Myanmar that the United Nations has described as ethnic cleansing.

Among those the pope met was Shawkat Ara, a 12-year-old Rohingya orphan who broke down in tears shortly after the pope spoke to her and gently touched her head.

"My parents were killed. I don't have any joy," she said, saying she had lost her entire family in an attack by the military in Myanmar.

Pope Francis is known for championing the rights of refugees and has repeatedly expressed his support for the Rohingya, a persecuted Muslim minority whom he has described as his "brothers and sisters".

But the usually forthright pontiff walked a diplomatic tightrope during his four days in Myanmar - the first ever papal visit to the country - avoiding any direct reference to the ethnic cleansing allegations in public while appealing to Buddhist leaders to overcome "prejudice and hatred".

Hours after arriving in Bangladesh he addressed the issue head-on, calling for "decisive" international measures to address the "grave crisis".

But as in Myanmar, he avoided using the term "Rohingya", drawing criticism from some rights activists and refugees.

The word is politically sensitive in mainly Buddhist Myanmar because many there refuse to see the Rohingya as a distinct ethnic group. 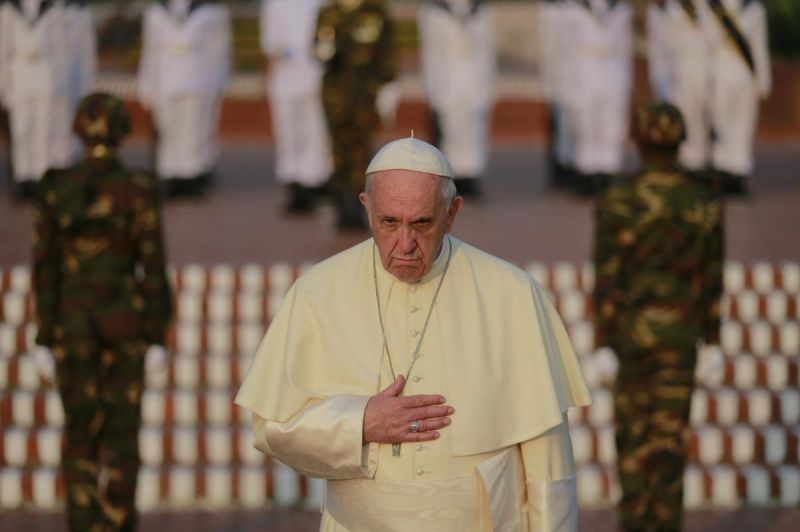 Pope Francis, pays his tributes to the 1971 war Martyrs at the National Martyrs' Memorial of Bangladesh. (Photo: AP)

The 80-year-old Roman Catholic leader has frequently sought to influence a world he sees as indifferent to the plight of refugees forced to leave their homelands, whether through poverty or conflict.

In 2016 he took three Syrian families, all Muslim, back to the Vatican after visiting them on the Greek island of Lesbos, a hotspot for asylum seekers.

He has praised Bangladesh for giving refuge to the Rohingya, who have brought with them stories of horrific abuse at the hands of the Myanmar military and local Buddhist mobs, including rape, arson and murder.

Earlier the pope led a giant open-air mass in Dhaka attended by around 100,000 Bangladeshi Catholics who sang hymns in Bengali and chanted "viva il papa" ("long live the pope") as he was driven through the crowd in an open-sided popemobile.

Bangladesh has a tiny Christian population but they turned out in large numbers for Friday's service, many having queued for hours to get into the park.

Some 4,000 police and security forces were deployed for the mass in the mainly Muslim country, which has suffered a number of attacks on religious minorities by Islamist extremists in recent years.

"I feel like I am blessed to join the Pope's prayers," said 60-year-old widow Pronita Mra, who had travelled from her village in northeastern Bangladesh.

"I'll pray for my late husband and parents so that they go to heaven. I hope the Pope will pray for peace and harmony among all communities in Bangladesh."

Christians make up less than 0.5 percent of officially secular Bangladesh's population of 160 million and community leaders say it has become more difficult to practise their faith openly.

But speaking to Muslim, Buddhist and Hindu leaders, Francis praised the country's commitment to religious freedom, which he said "stands as a subtle yet firm rebuke to those who would seek to foment division, hatred and violence in the name of religion".