Pope Francis is known for championing the rights of refugees and has repeatedly expressed support for the long-suffering Rohingya. 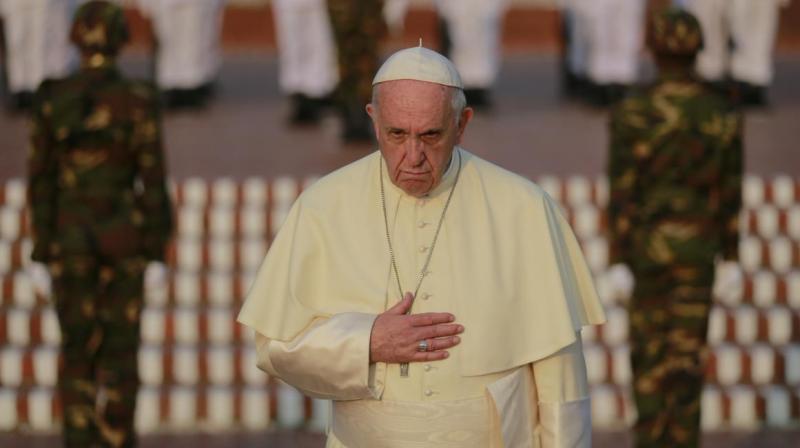 The usually forthright pontiff walked a diplomatic tightrope during his four days in Myanmar - the first papal visit to the country - avoiding any direct reference to the Rohingya in public. (Photo: AFP)

Dhaka: Pope Francis wrapped up a high-stakes Asia tour Saturday after meeting Rohingya refugees in Bangladesh in a highly symbolic gesture of solidarity with the Muslim minority fleeing violence in Myanmar.

The Catholic leader visited a hospital in Dhaka run by the order of Mother Theresa on the final day of a visit to Bangladesh and Myanmar that has been dominated by the plight of the Rohingya.

Pope Francis is known for championing the rights of refugees and has repeatedly expressed support for the long-suffering Rohingya, whom he has described as his "brothers and sisters".

The usually forthright pontiff walked a diplomatic tightrope during his four days in Myanmar - the first papal visit to the country - avoiding any direct reference to the Rohingya in public while appealing to Buddhist leaders to overcome "prejudice and hatred".

In Bangladesh he addressed the issue head-on, meeting a group of Rohingya refugees from the squalid camps in southern Bangladesh in an emotional encounter in Dhaka.

Among them was a 12-year-old girl who told him she had lost all her family in a Myanmar army attack on her village before fleeing across the border earlier this year.

"Your tragedy is very hard, very great, but it has a place in our hearts," he told them.

"In the name of all those who have persecuted you, who have harmed you, in the face of the world's indifference, I ask for your forgiveness."

Read: After much precaution in Myanmar, Pope uses ‘Rohingya’ for refugees in B’desh

The pope referred to the refugees as Rohingya, using the term for the first time on the tour after the archbishop of Yangon advised him that doing so in Myanmar could inflame tensions and endanger Christians.

The word is politically sensitive in the mainly Buddhist country because many there do not consider the Rohingya a distinct ethnic group, regarding them instead as incomers from Bangladesh.

He had faced criticism from some rights activists and refugees for failing to address the issue publicly.

The pope did not visit the refugee camps, where only a handful were aware that one of the world's most high-profile leaders was championing their cause just 300 miles (around 500 kilometres) away.

One refugee expressed gratitude that the pope had finally uttered the word Rohingya, and said he believed the meeting would have a big impact.

"It is the first time that a great world leader has listened to us," said 29-year-old Rohingya teacher Mohammad Zubair.

"This meeting will send a clear message to global leaders."

Analysts were more cautious. Alyssa Ayres, senior fellow with the Council on Foreign Relations, said the pope's recognition helped raise global awareness of the humanitarian crisis, "but it unfortunately does very little to address the big questions about their future".

More than 620,000 Rohingya have crossed into Bangladesh since a militant attack on police posts in late August sparked a deadly crackdown by the Myanmar military.

They have given consistent accounts of mass rape, killings and villages deliberately burned to the ground by soldiers and Buddhist militia.

The two countries in November signed an agreement to begin repatriating refugees, but rights groups say they are concerned about plans to house them in camps away from their former homes - many of which have been destroyed.

The pope returns to Rome on Saturday having led well-attended open-air masses in Bangladesh and Myanmar, which both have small Christian populations.

In the morning he was greeted by hundreds of Bangladeshi nuns at the Mother Teresa House clinic, all dressed in the blue-and-white habit favoured by the woman who dedicated her life to the region's poorest.

Earlier he paid tribute to the works of Catholics in Bangladesh, where schools and clinics run by the church provide a lifeline for poor communities.

"I am sure if the pope touches my head and prays for me, I'll be cured," Ananda Hira, a kidney patient who receives dialysis at the clinic, said ahead of the visit. "God listens to his prayers."