Around 500,000 women were reportedly violated by the Pakistan Army and their collaborators. 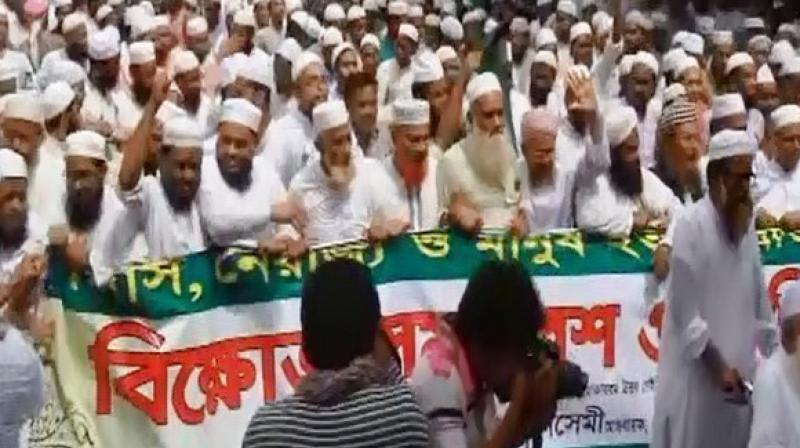 Experts sitting offshore are also concerned over the growing alliance of the BNP and Islamic fundamentalists as they believe the perpetrators of 1971 are still stronger than pro-liberation forces. (Photo: ANI)

Dhaka: As Bangladesh gears up for the general elections to be held in December 2018, the Islamic forces in the country have started gaining ground.

The Khalida Zia-led Bangladesh Nationalist Party (BNP), in alliance with Jamaat-e-Islami and other Islamic fundamentalist groups, are making attempts to root out the Sheikh Hasina-led Awami League.

Experts believe that the Jamaat-e-Islami has committed war crimes during the 1971 Liberation War and killed three million people in the name of Islam.

Around 500,000 women were reportedly violated by the Pakistan Army and their collaborators.

Shahriar Kabir, a Dhaka-based journalist and human rights activist, said, "The rise of Islamic militancy, terrorism in the name of Islam, perpetrated by the Jamaat-e-Islami and the Hifazat-e-Islam, is backed by the BNP, one of the largest political parties of Bangladesh. Because of the BNP, the Jamaat-e-Islami and the Hifazat-e-Islam as well as other fundamentalist and extremist groups have become so violent and we have seen their violence starting from February 2013.”

Experts sitting offshore are also concerned over the growing alliance of the BNP and Islamic fundamentalists as they believe the perpetrators of 1971 are still stronger than pro-liberation forces.

Rohan Gunaratna, an expert on international terrorism based in Singapore said, "The Jamaat-e-Islami ideology has formed the sea bed, the foundation for the emergence of extremist and terrorist groups in Bangladesh. If not for the Jamaat-e-Islami, so many people would not have been radicalised and we have seen the emergence of JMB (Jamaatul Mujahideen Bangladesh), HuJI-B, the Harkat-ul-Jihad-al Islami Bangladesh and a number of other groups."

The rise of Islamic forces in Bangladesh not only affects the common people in the country, but also raises concerns for the fragile neighbourhood.

BNP-Jamaat-led coalition governments in the past had provided shelter, funds and training to secessionist insurgent groups of north eastern India.

A BNP return to power would mean New Delhi facing a hostile government in Dhaka as it would again allow anti-India groups to gain ground on Bangladesh soil.